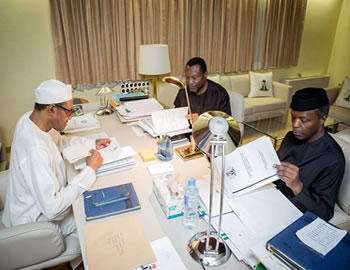 THE Federal Government has said it cannot fund National Assembly constituency projects listed in the budget, while it cannot, as well, guarantee the full implementation of the budget as signed by the president.

Secretary to the Government of the Federation (SGF), David Babachir Lawal, who stated this while appearing  before a Joint Senate Committee on Wednesday, said the government was, after all, not in a position to fully implement the N6.06 trillion budget.

The SGF, who was summoned by the Senate on Tuesday to clarify his statement to the effect that the government may not implement constituency projects, said revenues of the Federal Government had dropped by 50 to 60 per cent.

Babachir, drilled by the joint committees, including the committee on Ethics, Privileges and Public Petitions; Appropriations and Finance, blamed the drop in government’s revenue on activities of militants who had been vandalizsing pipelines in the Niger Delta.

According to him, the oil benchmark of the Federal Government for the budget had been dislocated, adding that at a stage, the country’s oil production came down to about 800,000 barrels per day.

“Lawmakers are aware that oil barrels had dwindled to about 800,000 per day. You predicated the revenue base of the government at 2.2 million barrel per day. This has led to the inability of government to finance the budget. It is the duty of government to prepare the minds of Nigerians ahead that there will be challenges in implementing the budget,” he said.

He further added that “government based its principle on zero budgeting this year. Funds will be released to finance key projects in line with the implementation plans of the government.

“I spoke with the Minister of Budget this morning (Wednesday) and I asked him the revenue base of the government. We are now receiving about 50 to 60 per cent earnings from what we projected.

“Some ministries, department and agencies (MDAs) might find it impossible to implement projects appropriated in their budgets. We have to re-prioritise. I like us to understand that this is the background upon which I made that statement.”

The Senators and the SGF had earlier engaged in an altercation immediately he arrived the committee sitting.

While making his introductory remarks, the SGF objected to the tone of the letter sent to him by the committee and the threat he said was contained in the letter, saying he was being threatened.

But the senators rejected his objection and asked him to withdraw the statement.

“I only saw this letter this morning. I thought it was going to be Wednesday next week. I wanted my permanent secretary to write to request for another date, knowing that Wednesdays are for Federal Executive Council (FEC) meetings. You gave me very short time to prepare,” he said.

No going back on Saraki, Ekweremadu’s trial —AGF