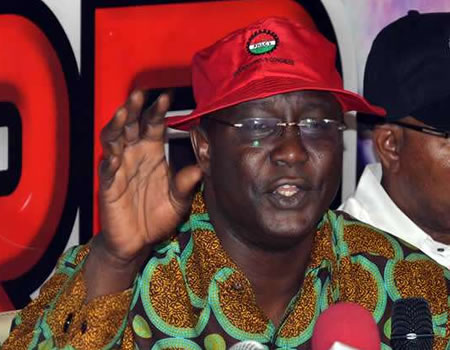 The Nigeria Labour Congress (NLC) and the Organisation of Trade Unions of West Africa (OTUWA) have jointly condemned and rejected the move by the Economic Commission of West African States (ECOWAS) to admit the Kingdom of Morocco, a country in North Africa, into the commission.

Beside the fact that the treaty establishing ECOWAS in 1975, or its subsequent amendments, did not permit a geographically non-West African State to become a member of the organisation; the NLC warned that ECOWAS cannot be hobnobbing with a monarchy which has continued to illegally occupy Western Sahara and holding on to it as a colony.

This, according to the NLC is against the wish of the international community, the United Nations and African Unions (AU).

Both President of NLC, Comrade Ayuba Wabba and the President of OTUWA, Comrade Mademba Sock, spoke at a workshop organised by OTUWA on a theme: “Rebuilding and Consolidating OTUWA and the Challenges of Implementing its 5-Year Strategic Plan;” in Abuja.

According to Wabba, “permit me to use this occasion to comment on the report that the Kingdom of Morocco has applied to become a member of ECOWAS.

“For us in the NLC, we do not know where in the treaty establishing the organisation either in its original form in 1975, or the subsequent amendments, says that we can find a clause permitting a geographically non-West African State to become a member of the organisation.

“Our concern in the NLC is that Morocco has a record of quarreling with its neighbours and even the entire continent. That’s why it stayed away from the OAU, later AU for over 30 years. It is on the basis of this quarrelsomeness that the Arab Mahreb Union, whose headquarters is in Morocco has been unable to function because the Kingdom is not in good terms with Algeria and its other member states.”

The NLC president added: “Similarly, we cannot be hobnobbing with a monarchy which against the wish of the international community, the UN and the AU, to be specific, has continued to illegally occupy Western Sahara, and is holding it as a colony.

“We will be asking our government and our National Assembly not to vote for the admission of Morocco into ECOWAS for the above reasons. We urge you, our colleagues in OTUWA member countries to ask your governments and national legislatures not to endorse the application of this kingdom to become a member of our ECOWAS.”

Also, Comrade Sock said recently, it has been in the news that the Kingdom of Morocco has applied to join the ECOWAS.

The OTUWA president said: “This application we understand is being considered by the member states and the relevant Council of ECOWAS. The public in the sub-region have not been told the rationale behind this application given that Morocco is in North Africa, and not geographically part of West Africa.

“Questions have been raised by observers whether this is good or bad for the economic integration in the sub-region. Unless, and until, a clear explanation is put in the public space, the controversy around this move will continue.

“The question is: will ECOWAS be ready, for instance, to accept South Africa or Egypt into the community if they choose to apply?”

FG to dredge River Benue as panacea to flooding ―VP