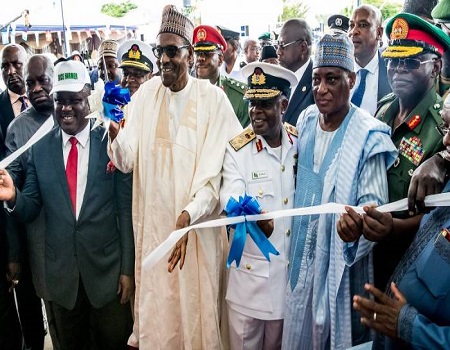 The President gave the assurance on Tuesday when he inaugurated the Nigerian Navy Reference Hospital in Calabar.

He said that his administration also placed premium on the welfare and well-being of security personnel who fought tirelessly to maintain peace and order in the country.

He added that the reference hospital would improve the quality of health services to naval personnel, their families and the public.

According to him, the drive of his administration is also to provide affordable healthcare services to the people.

He said “the importance of this facility cannot be over-emphasised, most importantly for the personnel of the Armed Forces in view of the enormous mental and physical exertion.

“I have no doubt that this facility, built with the state-of-the-art equipment, will improve the health standard of military personnel, their families and the public.

“I charge the Navy to ensure sustenance of this high standard hospital. This will help to realise the value of resources committed into the project.

“Our investment in healthcare and accommodation for military personnel will help them to bring out their best in national security.

“I want to commend the Chief of Naval Staff (CNS) Vice Adm. Ibok Ete-Ibas and the Chief of Defence Staff, Gen. Abayomi Olonisakin for realising these great projects.”

The President also inaugurated the 100 units model bricks accommodation at Atimbo Navy barracks for officers of the Eastern Naval Command.

The chief of naval staff said that the building of the project was conceived between 1974 and 1976.

Ete-Ibas explained that the project was designed to serve as a model medical force multiplier facility for the Nigerian Navy and other military and paramilitary services in the southern part of the country.

The CNS said that the physical fitness and accommodation of naval personnel was key to discharging optimal services.

He explained that the hospital had been equipped with modern facilities that would help in reducing medical tourism abroad.

According to him, the hospital has the capacity to effectively attend to no less than 50 physiotherapy patients daily.

He added that “although work commenced on the facility in 1980 as a project of the Federal Ministry of Works and Housing, it suffered slow progress and was eventually handed over to Ministry of Defence in 1994.

“By 2012 when the Nigerian Navy took over the project, it was barely at 30 per cent completion over the 32 years construction period.

“A renewed commitment was however made in 2016 by the Nigerian Navy administration to deliver the hospital better than it was originally conceptualised.”

He commended President Buhari for releasing funds for the completion of the project, expressing hope that the value of the investment would be realised.

The Minister of Health, Prof. Isaac Adewole, who was represented by Dr Osagie Ehanire, the Minister of State for Health, lauded the Navy for the achievement.

He said that the people of Cross River were blessed to have the project coming into full operation, adding that the facility would deliver the best medical services to military personnel and the public.