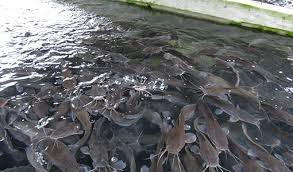 THE Catfish and Allied Fish Farmers Association of Nigeria (CAFFAN), has distributed smoked catfish as COVID-19 palliatives in support of government’s fight against the pandemic. The association made the donations to some states in the  country.

The beneficiary states include: Lagos, Oyo and Rivers as well as the Federal Capital Territory, Abuja.

National president of CAFFAN, Mr. Oloye Rotimi, flagged-off the  distribution of the smoked fish to the Oyo State government at the Oyo State secretariat, Ibadan.

The CAFFAN national president said the gesture was to support the government in the provision of palliatives to Nigerians in order to cushion the effect of the coronavirus pandemic.

Oloye said: “We are here today to answer the clarion call of the president of the Federal Republic of Nigeria, calling for support from organisations and individuals to support the government in provision of palliatives that can be used to alleviate the sufferings of the less privileged in this period of COVID-19 pandemic.”

He further emphasised that the distribution of the smoked catfish was very important at this crucial time, stressing that it is one of the veritable sources of animal protein with complete profile of essential amino acids necessary for body building, rapid cell replication and development of the body’s immune system.

While calling on the Federal government and state governments to include home-grown fish as part of items for distribution to all vulnerable and less-privileged Nigerians, Oloye noted that home-grown fish helps in building immune systems that fight against the ravaging effects of diseases.

“Home-grown fish is a mandatory food item in every home, especially now that various diseases and infections appear to challenge our health and well-being.” he said.

The CAFFAN president, however, said that the beneficiaries of the CAFFAN Initiative in their respective states would appreciate the quality of the home-grown and processed fish, provided by its members across the country.

The FCT chapter of CAFFAN, led by its Chairman, Alhaji Hassan Mundu, donated the smoked catfish to the Internally Displaced Persons (IDPs) at the Kuchingoro Kaura Camp, Abuja.

He pointed out that the humanitarian gesture was designed to promote fish as a source of protein to complement carbohydrates and other classes of food.

According to the Rivers State CAFFAN Chairman, Elder Clapton Ogolo, the donation was aimed at ameliorating the sufferings of the less-privileged people due to the COVID-19 pandemic in the state.

CAFFAN, Rivers State Chapter also presented its post COVID-19 plan; while it also entered into a partnership with the government to provide a minimum of 500,000 juveniles to its members at highly subsidised rates, toenable them continue their farming business during and after the COVID-19 pandemic.

According to CAFFAN, government at all levels should harness the economic value inherent in aquaculture for better yieldsand a means of diversification of the economy from its over reliance on crude oil.