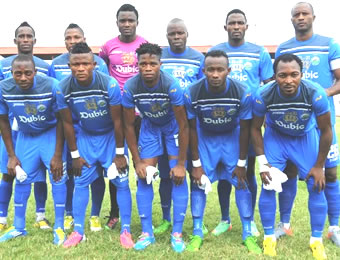 Mamelodi Sundowns of South Africa now top of the group with three points following their 2-0 win at Algeria’s Entente Setif on Saturday.

Sundowns host Enyimba on June 29 in continuation of the competition.

Sunday’s kick-off was delayed by heavy rain in Port Harcourt.

Bassem Morsy headed Zamalek in front in the seventh minute, when his effort lobbed over goalkeeper Theophilus Afelokhai.

The waterlogged pitch caused by the heavy rain in Port Harcourt virtually made it impossible for both teams to string passes on the pitch for a large part of the encounter.

Kester Kelly forced a save from Zamalek goalkeeper Ahmed El-Shennawy after 21 minutes.

Enyimba continued to press for an equaliser and in the 37th minute Ahmed Tawfik made a timely clearance to keep the Nigeria champions at bay.

Joseph Osadiaye’s  free kick in additional time missed target narrowly as both teams retired to the changing rooms with the Egyptians holding on to their lead.

In the second half, Enyimba pressed even more in search of a leveler, while Zamalek relied on quick breakaways to destalibise their hosts.

New signing Ifeanyi Onuigbo was denied by a timely block inside the box on 54 minutes.