‘My 100 per cent loyalty now with Ajimobi’ 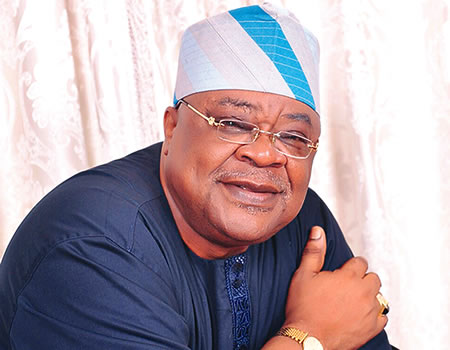 SPEAKER, Oyo House of Assembly, Honourable Olagunju Ojo has affirmed his 100 per cent loyalty to Governor Abiola Ajimobi, adding that he had would not join former governor, Adebayo Alao Akala in the Action Democratic Party (ADP).

Alao Akala who had recently dumped the All Progressives Congress (APC) for the ADP, is known to have been Ojo’s political leader, over the years.

Ojo, who spoke with Nigerian Tribune, said that though he had no friction with Alao Akala, he had reached a time in his political career where he could be free from his master.

Asked how he intended to win without the much-known clout of Alao Akala in Ogbomoso, Ojo said wonders of God that would bring about his victory at the polls were bound to happen.

Ojo’s decision is not also unconnected with the fact that he has got the ticket to the APC to contest for the Ogbomoso North/Ogbomoso South and Oriire federal constituency seat.

“There is time for everything; a time to follow and a time to have your own freedom. There will be a time when a master will free a learner.

“By the grace of God, you will see wonders in 2019. Remember that in 1999, I wasn’t under anybody before I won the election and became the Deputy Speaker. Let us leave everything to God.

“Politically, 100 per cent of my loyalty is with Governor Abiola Ajimobi. While as a leader in Ogbomoso, I have no friction with former governor Alao Akala.

“If you look at my antecedents, I have always been a progressive since the time I joined politics as far back as 1999. I contested on the platform of the Social Democratic Party in 1990 and I won as a councillor.

“In 1999, I contested under the platform of the Alliance for Democracy to this same House of Assembly and I won. Apart from some years in between, that I joined PDP because of some necessities at home, then. Now, I am back to where I belong,” Ojo said.

Speaking further, Ojo said he was optimistic that governorship candidate of the APC, Mr Adebayo Adelabu will emerge Ajimobi’s successor.

“By the grace of God, our governorship candidate, Adebayo Adelabu, will on May 29, 2019, be sworn in as the governor of the state,” he added.

My government did not cede LAUTECH to Oyo ― Oyinlola