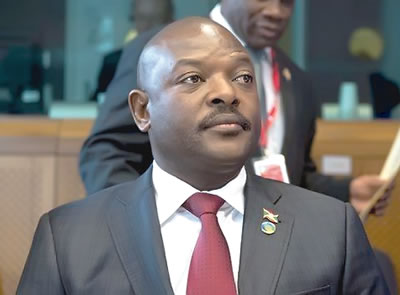 A senior aide to Burundi’s president Pierre Nkurunziza was injured in an attack on Monday night that also killed one of his bodyguards, officials said, according to Reuters.

The International Criminal Court (ICC) says at least 450 people have been killed in the central African nation since Nkurunziza’s announcement early last year that he planned to seek a third term triggered a surge in violence.

Monday’s assassination attempt on Willy Nyamitwe, a senior communications officer for Nkurunziza, occurred in the Kajaga suburb of the capital Bujumbura, according to a security official who requested anonymity.

“Nyamitwe was slightly wounded on his arm during the attack. He is receiving treatment,” the official told Reuters, adding that the incident took place near Nyamitwe’s home at about 7:30 p.m.

“One of his bodyguards died on the spot, while another was seriously injured,” the source said.

Nkurunziza was re-elected in July 2015 in a poll largely boycotted by the opposition, which says his extended presidency violates the constitution and the terms of a deal that ended a previous rebellion. Some opponents have taken up arms against his government.

On his Twitter account, Foreign Minister Alain Aimé Nyamitwe said the aide, who is also his brother, had “survived another assassination attempt”.

How gunmen kill driver, carted away N5m in Warri