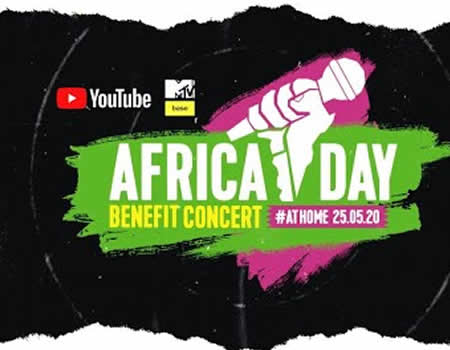 To celebrate Africa Day on Monday, May 25, 2020, ViacomCBS Networks Africa and YouTube, in partnership with Idris Elba, are hosting an ‘Africa Day’ benefit concert at home.  This programming event will be aimed at raising funds to help children and families in Africa that are affected by the COVID-19 pandemic. All proceeds raised from the benefit concert campaign will be donated to support food and health needs for those most impacted on the continent.

The ‘Africa Day’ benefit concert at home will be a two-hour special streamed and will be broadcast to millions of viewers in Africa and around the world on MTV channels and on the MTV Base Africa YouTube channel. Hosted by Idris Elba, the show will bring together a star-studded lineup of some of the hottest names Africa has to offer.

In the weeks to come, more artistes are set to join to make this a monumental experience. The benefit concert will also be made available after Africa day to encourage people and organisations to donate. Further details on how to donate and the facilitation partners will be made available in the days to come.

Idris Elba says, “Taking a moment to shine a light on African arts to benefit the African homeland and its people. A continent of this size should find a way to dig deep and stand up for one another at a time like this. It is important for the future and history will not forget.”

Alex Okosi, managing director of Emerging Markets in Europe, the Middle East and Africa at YouTube says, “Music is a powerful tool that connects Africans and this Africa Day concert is a great way to bring people together and support a great cause. We are honoured at the opportunity to bring the power of YouTube to support this great initiative.”

Monde Twala, senior vice president for ViacomCBS Networks Africa Youth, Music & Entertainment Channels commented. The COVID-19 pandemic has affected the livelihoods of millions across the continent and is going to require a massive collaborative effort if we are to make it through. ViacomCBS Networks Africa is proud to partner with YouTube and Idris Elba as we lead the efforts for immediate food and health assistance on the continent at the Africa Day Benefit At Home concert. We are coming together as Africans to take care of our own.

The COVID-19 pandemic has affected the lives of many and disrupted economic activity which has increased the threat to food and health security on the continent. All donated proceeds will be funneled towards tackling this humanitarian crisis.