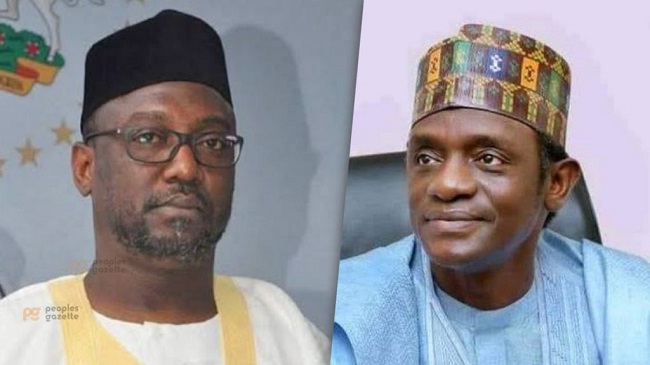 Yobe State Governor, Mai Mala Buni, who returned to the country on Wednesday night is in crucial with his Niger State counterpart, Abubakar Sani Bello and certain members of the All Progressives Congress Caretaker/ Extraordinary Convention Planning Committee (APC CECPC).

The meeting is ongoing at the Yobe State Governor, Asokoro, Abuja.

Details of the meeting are sketchy.

A party source revealed that Governor Buni is being formally briefed by Governor Bello on an update on the scheduled Convention while the former was away in Dubai.

The ten members of the Caretaker team had met at Niger State Governor’s Lodge before proceeding to meet with Governor Buni.

Two members of the Media Committee for the Convention, Minister of Information, Lai Mohammed and Nasarawa State Governor, Abdullahi Sule later came to Yobe Governors Lodge to meet with members of the CECPC.

Meanwhile, a group within the party, APC Concerned Forum (APCCF) has kicked against the sack of the party national secretary, John James Akpanudoedehe by ten other members of the APC CECPC.

Speaking with journalists in Abuja, the national convener of the group, Comrade Okpokwu Ogenyi, said the Caretaker Committee was not vested with the power to sack a national officer.

They maintained that only the National Executive Committee of the party was vested with such power.

“It is now clear that after the failed coup to dethrone the Chairman and Secretary of the Caretaker Extraordinary Convention Planning Committee, the sponsors have come back in the name of Vote of No Confidence just to detract the party and delay the planned March 26th National Convention.

“We want members of the Caretaker Committee to know that President Muhammadu Buhari is the national leader of the APC whose integrity has kept the party till date, we shall not tolerate any fragrant disobedience to Mr President by trying to cause another crisis in the Party.

“We, therefore, call on the Director-General of the Department of State Service (DSS) and the Inspector General of Police (IGP) to immediately arrest and interrogate the problem makers in the committee who purportedly signed the so call Vote of No Confidence letter which is an abuse of office to enable the party to have a crisis-free convention.”