Building a pyramid of debts 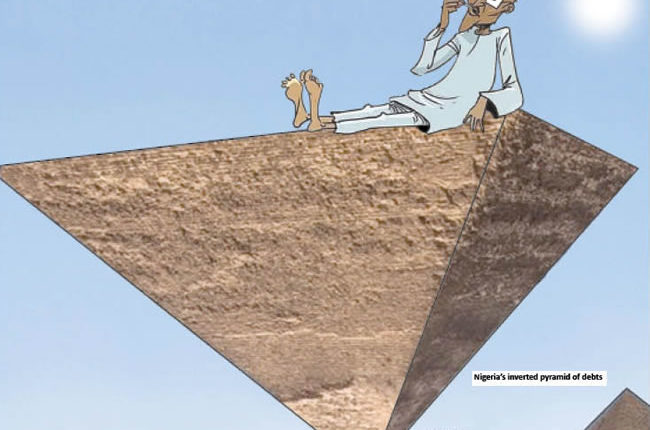 AN increasing lack of ingenuity on how to expand the economy and increase its revenue generation, by the Federal Government again manifested itself on Thursday when President Muhammadu Buhari presented his 2021 budget proposal to the National Assembly which showed increasing reliance on debt to finance the country’s expanding appetite for consumption.

According to the president, who proposed a total of N13.08 trillion total expenditures, only a largely ambitious maximum of N7.88 trillion is being expected from its various revenue sources to fund the budget.

An analysis of the last five years’ budgets would  reveal that the Federal Government has not been able to meet 70 per cent of its revenue expectations thus leading to bursting its annual deficit projections at the end of each budget cycle.

The 2021 budget proposal, according to Buhari, was predicated on the 2021-2023 Medium Term Expenditure Framework (MTEF) and Fiscal Strategy Paper (FSP), which benchmarked oil price on $40 per barrel; daily oil production estimate of 1.86 million barrels; exchange rate of N379 per US dollar; GDP growth rate of 3.0 per cent and inflation closing at 11.95 per cent.

Total revenue available to fund the 2021 budget is estimated at N7.886 trillion broken down into oil revenue of N2.01 trillion and non-oil revenue estimate  of N1.49 trillion from federation account although more than 60 per cent of revenue is expected from independent sources.

With N5.02 trillion projected deficits or 3.64 perc ent of GDP, the 2021 budget already runs afoul of the Fiscal Responsibility law as it crossed the three per cent permissible threshold. Buhari, however, “noted that we still face the existential challenge of coronavirus pandemic and its aftermath; I believe that this provides a justification to exceed the threshold as provided for by this law”, adding “the deficit will be financed mainly by new borrowings totalling N4.28 trillion, N205.15 billion from Privatization Proceeds and N709.69 billion in drawdowns on multilateral and bilateral loans secured for specific projects and programmes.”

The Presidency and National Assembly alone will consume a combined N201 billion with almost N73 billion going to the former while the legislature will take N128 billion.

Agencies with first line charges will get a combined N484.49 billion, which the President explained represents a 13 per cent increase over the 2020 revised budget.

Although the Fiscal Responsibility Act 2007 compels all beneficiaries of statutory transfers to provide the Budget Office of the Federation with periodic reports on the allocation and expenditure of funds for inclusion in the quarterly budget implementation report, details of National Assembly spending have never been made public.

Buhari told the legislators that the 2021 capital budget is N1.15 trillion higher than the 2020 provision of N2.69 trillion and “at 29 per cent of aggregate expenditure, the provision moves closer to this administration’s policy target of 30 per cent.

“Capital expenditure in 2021 remains focused on the completion of as many ongoing projects as possible, rather than the commencement of new ones. We have also made efforts to ensure equity in the distribution of projects and programmes in the proposed budget. I will be providing the National Assembly a list of some of the most critical projects which we must work collectively to ensure they receive adequate funding. Until projects reach completion, they do not deliver the dividends of democracy that Nigerians rightly deserve”, he stated.

But as it has become the norm since 2016, capital expenditure is predicated on the ability of government to attract borrowing.  The 2021 budget proposal makes provision for N3.85 trillion for this line, which will be extracted from the proposed N4.2 trillion new loans.

Should the new loans come, Buhari said it would be deployed to mostly ongoing projects rather than start new ones. Recall that chairman of ICPC, Professor Bolaji Owasanoye, recently revealed that civil servants and legislators now introduce new projects into appropriation laws in the guise of ongoing projects.

Highlights of the 2021 Capital Projects

Others are: Niger Delta Development Commission: N64 billion; Ministry of Agriculture and Rural Development will facilitate the integrated development of its sector by promoting crops’ value chains  as well as providing rural roads, water and sanitation, veterinary and pest controls, grazing, food and strategic reserves, and access to inputs and extension services.

The 157 per cent increase in the capital allocation to the health sector is to enhance the capacity to deliver healthcare services through the procurement of equipment, vaccines and other facilities. Two centres of excellence, as well as one Accident and Emergency Centre, will be equipped in Federal Teaching Hospitals in each geopolitical zone.

In addition, numerous Primary Health Care Centres will be equipped and upgraded across the six geopolitical zones. Furthermore, funds have been allocated for the expansion of Midwives Service Scheme in the six geopolitical zones. To enhance occupational safety, funds have been provided for the provision of Personal Protective Equipment for health workers.

The Ministry of Education’s capital allocation has been increased by 65 per cent to improve the education of our children. Funds have been provided for the provision of scholarship awards to Nigerians. “We have provided funds for the upgrade of security and other infrastructural facilities in our Unity Colleges nationwide. To improve access to education, we have made provision for the establishment of five new Federal Science and Technical Colleges. We have also provided for the payment of allowances to 5,000 teachers under the Federal Teachers Scheme.

“In line with our commitment to invest in Transportation Infrastructure, capital allocation to the Works and Housing sector is to facilitate the completion of several critical projects in 2021. I have directed the Minister of Finance, Budget and National Planning to provide a detailed breakdown of key infrastructural projects in her subsequent Press Briefing.

“Provisions have been made for legacy debts owed to local contractors’ compensation and resettlement of project-affected communities, the Renewable Energy Micro Utility (Solar) project, and the construction of transmission lines and substations nationwide. These project’s implementation is expected to have positive impact on electricity supply nationwide, as well as boost productivity and employment.

“Projects to be implemented by the Ministry of Water Resources in 2021 include provision of potable water in the North-East, construction of irrigation and dams across the country, and the provision of Water, Sanitation and Hygiene facilities.

“The Ministry of Transportation has earmarked funds for projects such as the Lagos-Ibadan-Kano Line, Abuja-Kaduna Line, Port-Harcourt-Maiduguri Line and Itakpe-Ajaokuta-Warri Line. These projects, when completed, will minimize the cost of transporting people and goods around the country.”

The 2021 budget proposal also made provision of N65 billion for the Presidential Amnesty Programme in the Niger Delta “to maintain the peace in the Niger Delta region for economic and social activities to thrive.” This is in addition, to the N63.51 billion appropriated for the Niger Delta Development Commission and N24.27 billion has been provided for the capital projects of the Ministry of Niger Delta Affairs. These allocations should further support the development of the region by facilitating the completion of important ongoing projects, such as the East-West Road.

While it is believed that some key infrastructure will ultimately add value to the economy by triggering other value chain stimuli, most experts, however, are worried about the growing comsumption pattern of the country and its over realiance on foreign credit facilities to shore up  revenue shortfalls, thereby giving access to the Bretton woods institutions to directly and indirectly control the economy.

But Nigerians are watching the two chambers of the National Assembly closely  to see how they will treat the 2021 budget budget against the backdrop of the mounting external debts and deficit of critical infrastructure.

A tribute to my father, Imam Shuaib Agaka