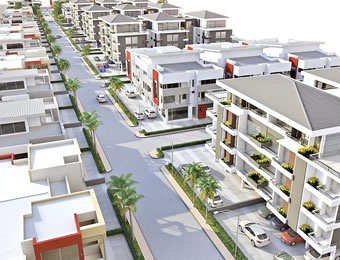 The Building Collapse Prevention Guild (BCPG), an arm of Nigerian Institute of Builders (NIOB), Ikeja Cell has called on prospective building developers and clients to engage the services of Quantity Surveyors before embarking on construction.

Bill of Quantities and Schedule of Materials prepared by Quantity Surveyors are the veritable instrument that assists the client at exercising control, some checks and balances on the building project cost.

Speaking at their forum in Ikeja last week, Mrs. Adejoke Alabi, the lead speaker at the seminar organised by BCPG Ikeja Cell recently, Mrs.Adejoke Alabi, who spoke on the event explained that prevention of defective building construction and building project abandonment begin at the point where  quantity surveyor uses the architectural, structural, mechanical and electrical drawings to determine the overall cost of the project.

“Once it is discovered that the cost of the proposed project is beyond the available or anticipated fund, the client could request the architect and engineers to review the design of the building to what he or she could afford rather than embarking on a building project that would take a long time to complete, thereby exposing the structure to the debilitating weather effects.” She argued.

Mrs. Alabi, a former Head of Quantity Surveying Department, Lagos State Ministry of Works and Infrastructure, corroborated the theme of the seminar, ‘Important Role of the Quantity Surveyors in the Prevention of Building Collapse,’ with a passage from the Bible, that says “Do not build a house without first sitting down to count the cost to see whether you have enough to complete it”, that causes of project abandonment starts from the above faulty premise.

The Coordinator of the BCPG Ikeja Cell, Mrs. Iyabode Bolarinwa, who is a professional builder, in her remarks, observed that most clients pretend to understand the architectural design until reality dawns on them when the building is being constructed.

“They begin to complain about the bogus sizes of the rooms and other spaces. As the project execution continues to gulp more fund, the client, not wanting to suspend the project becomes desperate, drawing money reserved for his or her business and might even be forced to borrow against his or her plan.

“The builder on such a project could suffer a transferred aggression from the client or the representative when he or she (the builder) refuses to cooperate on quality reduction due to insufficient funds.”

Mrs. Bolarinwa, a former Vice Chairman of Council of Registered Builders of Nigeria (CORBON) explained that many clients have suffered from collapse of businesses and high blood pressure for embarking on building construction without first quantifying the cost implications.

Responding to a constructive criticism by the former Chairman of the Nigerian Society of Engineers, old Lagos Branch, Mr. Babatunde Johnson, a civil/ structural engineer, that the Quantity Surveyor had the tendency of overprotecting the interest of the client to the detriment of the contractor, Mrs. Aderonke Oyelami, who is the Chairperson, Women Association of Quantity Surveyors of Nigeria explained that, “The Quantity Surveyor should be a cost arbiter that would ensure that the client is not cheated while the contractor or the executor of the project is not squeezed with tight and unrealistic rates that would tempt him or her to compromise on quality.”

Mrs. Oyelami further stated that, “In the contract bidding and pricing strategy, the Quantity Surveyor’s work serves mainly as a benchmark against which submissions are controlled. In that case, the lowest bidder might not necessarily be appropriate.”

Speaking from hindsight, the Chairman of the BCPG, Lagos State Chapter, Mr. Solomon Ogunseye, an architect observed that some clients were ignorant of the advantage of obtaining Bills of Quantities before embarking on construction projects.

“With reasonable charges, the Quantity Surveyor would assist a prospective home-owner cut his or her coat according to the individual’s size in terms of fund availability”, he concluded.

In his contribution, the Secretary of BCPG Ikeja Cell, Mr. Frank Ikuewan, a geologist highlighted the relevance of Schedule of Materials prepared by the Quantity Surveyor as a tool for discouraging pilfering of materials on site

Earlier, the BCPG National President, Mr. George Akinola, an architect, in his address, reiterated the benefit of synergy that Building Collapse Prevention Guild has been promoting among the built environment professionals which, ultimately, would bridge communication gap and reduce the unpleasant role rivalries and conflicts within the nation’s construction industry.