Buhari’s visit: US finalises repatriation of over $500m to Nigeria 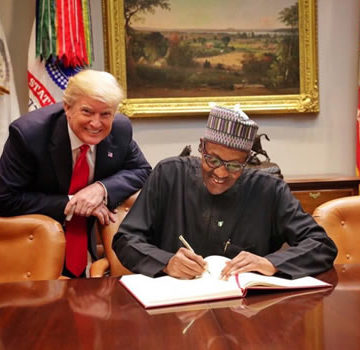 THE visit of President Muhammadu Buhari to U.S. President Donald Trump has yielded the finalisation of negotiations to repatriate more than 500 million dollars (about 190 billion Naira) of Nigeria’s looted money traced to the U.S.

Nigeria’s Attorney-General and Minister of Justice, Abubakar Malami, told the Correspondent of the News Agency of Nigeria (NAN) in Washington, DC, that he and the Attorney-General of the U.S. would be meeting on Tuesday to finalise the agreement.

Malami explained that the technicalities involved were being taken care of by both officials of the Nigerian Governments and also from the U.S. side.

He said: “On the part of assets recovery, we have made considerable progress through this visit.

“There’s goodwill by the two presidents to have a roadmap for the repatriation of illicit funds and assets traced to the U.S. as proceeds of illicit transactions.

“This illicit funds and assets are to the tune of 500 million dollars and above for immediate repatriation.

“We are looking at the shortest practicable time for it to be repatriated.

“There is political commitment demonstrated by the two presidents.

“The over 500 million dollars is not all the recovery, it is only for the immediate repatriation while we continue with our efforts to recover more.”

Malami defended Nigeria’s human rights record, saying the Buhari’s administration is the first in the history of Nigeria to pay compensation for human rights violations.

He said in April, the Federal Government paid N135 million for the eight Apo traders who were found to have been victims of extrajudicial killings by the Nigeria Police.

“Of the police officers indicted, two were sentenced to death. The payment of compensation was also as a result of the recommendation by the National Human Rights Commission and the government did not appeal against it,” he said.

He noted that Trump approved of what Buhari’s administration is doing.

“Trump said Buhari is a great leader; he said he has a great respect for him, and he said Buhari has cut down on corruption,” Malami said.

Center calls on labour to focus on building workers’ capacity

FG bans production and importation of codeine-containing syrups in Nigeria

Nigeria has highest burdens of tuberculosis, paediatric HIV in Africa ― WHO