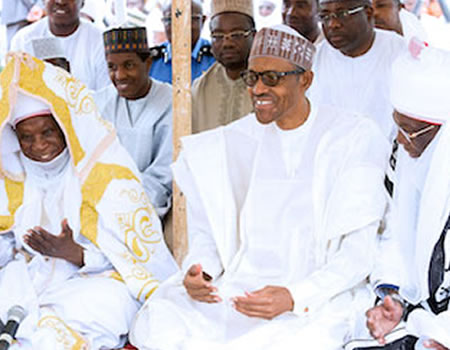 CHRISTIANS under the auspices of the Pentecostal Fellowship of Nigeria (PFN) Enugu State Chapter on Wednesday faulted President Muhammadu Buhari on the use of Hausa Language in his Sallah message to the nation.

The group, which insisted that the President did not address Nigerians but his kinsmen, said such action was capable of heightening tension in the land, stressing that it could further polarise the country along ethnic nationalities.

Chairman of the PFN in Enugu State and Bishop Elect of the Grace of God Mission, Reverend Dr Godwin Madu while officiating in a three-day prayer session, also condemned the quit notice to Igbo living in the North by the Arewa Youths as reckless and of no consequence, urging Nigerians not to panic as God is already in control.

The cleric noted, “Nigeria is one indivisible entity; the quit notice is the finger of the enemy trying to make Nigeria like Somalia, Eritrea and other crisis-ridden countries of the world.

“So, we are urging for calm because the notice is a joke. Our prayer is that God will touch the hearts of the people causing problems in this country,” Madu stated.

Ajujungwa and Idika accused Buhari of sectionalising the country, an action they said was capable of worsening the already tense situation.

“A lot is happening in this country everyday and those at the helm of affairs don’t seem to be helping matters. The other day the President was reported to have addressed Nigerians in Hausa language.

“To us, we maintain that it is the most unfortunate thing that should happen at this point in time. Nigeria has more than 250 languages, so how can the President address a section? We are asking him whether he is still President of the entire country.

“As far as we are concerned, he did not address Nigerians but his kinsmen, the Hausas; it is an unfortunate thing and an insult to other Nigerians who do not understand Hausa language,”, Ajujungwa quipped.

On his part, Bishop Onubogu called for continuous dialogue in the country, even as he said the Biafra agitators should stop using insulting words on people from other zones of the country.

“The answer is let us stop castigating each other; things must change; I have always said the three solutions to Nigeria problems are – dialogue, dialogue and dialogue. You can’t be calling people names and you say you are negotiating.

“We should also handle this Biafra agitation carefully; the notion that they are drug addicts is wrong. Among them we have intellectuals, successful business men and industrialists.

“But they should not go on abusing other regions.”

Benue youths call on Ortom to run for second term