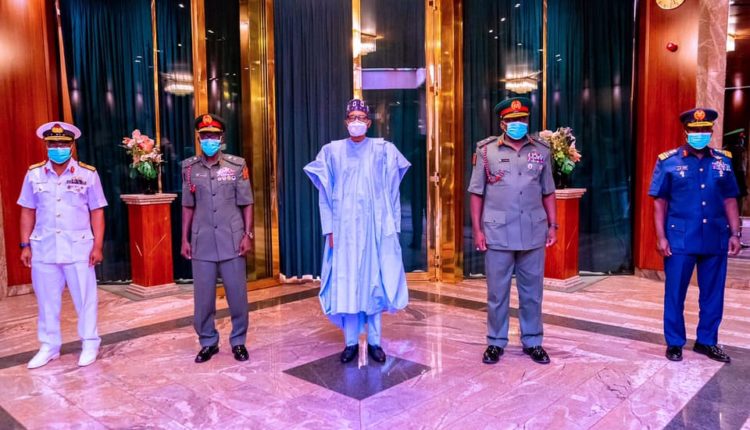 President Muhammadu Buhari has written the National Assembly to seek confirmation of the new service chiefs.

Senior Special Assistant to the President on National Assembly (Senate), Senator Babajide Omoworare, disclosed this in a statement he personally signed on Friday and made available to journalists in Abuja.

Senator Omoware further disclosed that the letter addressed to the Senate President, Ahmad Lawan dated 27th January 2021 was done in furtherance of Section 18 (1) of the Armed Forces Act Cap. A.20 Laws of the Federation of Nigeria.

He expressed the hope that “the president’s communication for consideration and confirmation of the nomination for appointment of the service chiefs would be undertaken when the Senate resumes for plenary session on 9th February 2021.”

In apparent reference to claims by certain senior lawyers and social activists that President Buhari was trying to bypass the federal lawmakers in the appointment of the service chiefs, Senator Omoware described the claim as misplaced.

He maintained that since its assumption of office, the Buhari administration has always deferred to the Senate in appointment of service chiefs.

He said: “Contrary to fears expressed in some quarters that President Muhammadu Buhari has bypassed the National Assembly in the process of appointment of the service chiefs and that he has no intention of seeking consideration and confirmation of their appointment, the president upon nomination for appointment sought confirmation of the Senate for the appointment of Major General Lucky Irabor, Major General Ibrahim Attahiru, Rear Admiral Awwal Gambo and Air Vice Marshal Isiaka Amao as Chief of Defence Staff, Chief of Army Staff, Chief of Naval Staff and Chief of Air Staff respectively, vide his aforementioned letter.

He recalled that unlike previous administration, President Buhari has always subordinated himself to the spirit and letters of the constitution.