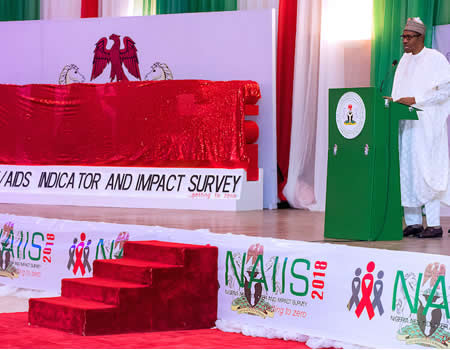 President Muhammadu Buhari on Thursday in Abuja formally unveiled the findings of the 2018 Nigeria HIV/AIDS Indicator and Impact Survey (NAIIS).

Buhari noted during the presidential announcement of the NAIIS result at the Banquet Hall of the Aso Rock that the results would form the future response to the country’s HIV and AIDS epidemic.

He said that the new prevalence of HIV and AIDS according to the result gives an estimate of 1.9 million people living with HIV in Nigeria presently.

According to him, this is an improvement to what was obtained in 2014, when the country was estimated to have 3.1 million people living with the virus in the country.

Buhari also noted that the results would provide the government with appropriate information that would enable the country to beat the 2030 target of ending the epidemic.

“This result will provide the government with information to move forward in the HIV fight based on scientific data.

“We are already a step ahead in this regard.

“However, we cannot celebrate yet as we are more committed to ensuring that more people are placed on treatment.

“Now that we have the data, I urge us all to work together to ensure that we deliver ahead of 2030,” he said.

He added that in line with his administration commitment to healthcare, the government would ensure more people living with HIV are put on free anti-retroviral treatment.

He also appreciated the U.S. government, PEPFAR, Global Fund and all partners that contributed to the success of the survey.

He however tasked the Ministry of Health and the National Agency for the Control of AIDS (NACA) to work closely with state governments with high HIV prevalence by ensuring that the epidemic was drastically reduced.

NAN recalls that the Federal Government launched the National AIDS Survey on June 28, 2018, to determine the true distribution of HIV and AIDS, Hepatitis B and Hepatitis C in the country.

The survey, which is the largest HIV survey in the world, reached more than 250,000 respondents in nearly 100,000 households in the 774 local government areas of the country.

The survey was completed at the end of December 2018.