Buhari to flag off 2019 Anti-Corruption Marathon in Abuja 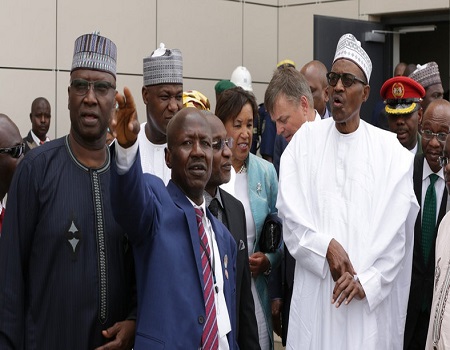 Mr Jacob Onu, the National Coordinator of the National Anti-Corruption Marathon Race, says plans have been concluded for the flagging off of the 2019 edition of the race by President Muhammadu Buhari on Dec. 9 in Abuja.

Onu told newsmen in Abuja on Tuesday that over 4,000 participants would feature in this year’s event.

He said the race which would hold simultaneously with the United Nations (UN) International Anti-Corruption Day was designed to create awareness on Buhari’s fight against corruption.

He also said that a national youth and student summit on anti-corruption and drug abuse would be organised the same day at Nile University in Abuja, where prominent Nigerians would deliver papers.

“The fight against corruption is not a one off battle, rather a continuous one that requires perseverance and endurance; this is the reason behind the initiative.

“The marathon race is symbolic in that without perseverance and endurance one can’t start and finish a marathon race. This initiative happens to be the first globally.

“Just as President Buhari was vocal when he said that ‘if we do not kill corruption, corruption will kill us’, ours is to create more and more awareness on the dangers of corruption to the existence of our citizens, especially the youth.

“It is our desire that it is sustained over time and improved on in subsequent editions. It is also expected to be a platform to encourage and empower participating athletes.

“More athletes have registered to participate and registration is free and it is still ongoing at www.nationalanticorruptionmarathon.org.ng,” Onu said.

According to him, machinery has been set in motion to ensure that the forthcoming marathon meets the standard required for the International Association of Athletics Federations (IAAF) now World Athletics to recognise and subsequently add the marathon to its calendar.

Onu explained that participants were expected to go home with cash prizes ranging from N1 million to N20,000, as participants would have their name enshrined as vanguards in the fight against corruption through the awareness the marathon would create.

“We intend to make it an international marathon from the next edition,” he added.

The Minister of Sports and Youth Development, Sunday Dare, said the message of anti-corruption can further be entrenched in the minds of the people through activities like this.

Dare, who was represented by Mr Ademola Are, Director, Grassroots Sports Development, said there was the need to engage in races like this to help Nigerians attain mental fitness.

This, he said, would help to reduce the national health budget of the country.

“We are not just taking part for the sake of taking part in races, sports has its various benefits; apart from the money the winners will win, you will become more healthy because there is a lot to benefit from being physically fit.

“Talking about anti-corruption is like an executive law and giving prominence to it to make sure people remember that such a thing is ongoing in society.

“So, it is a very good thing of joy that the ministry is partnering with the Fair Play Sports International Agency and other of its partners to ensure Nigerians take part in marathon races.

“We might not be able to eradicate totally corruption and our own idea of corruption is money; it is not only money, because we are guilty of corruption in one way or the other even in our various offices.

“When you deny your subordinate what they are supposed to get or using the office to get what you are not due to get is also corruption, so by taking part in this programme, the awareness will continue to go round,” Dare said.

Dare called on individuals and corporate organisations to join hands with the government to enable it to achieve its set objectives of building a nation that Nigerians would be proud of.