Buhari sends delegation to condole with Sultan, Danbaba, over death of Sardauna’s daughter 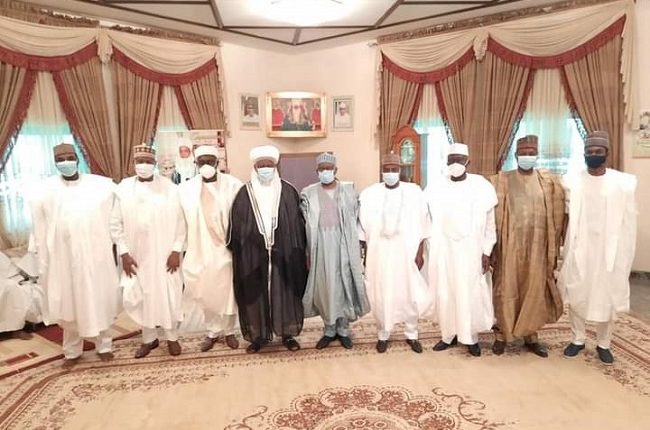 The delegation was led to the Binanchi Sokoto residence of the Mgaajin Garin Sokoto, the eldest son of the deceased, by Governor Aminu Waziri Tambuwal in the company of his Deputy, Alhaji Mannir Muhammad DanIya.

Earlier on arrival in Sokoto, the delegation was at the Sultan’s palace where they deliver a message of condolence on behalf of the President to Sultan of Sokoto, Sa’ad Abubakar III, who lost his elder brother, Buhari Abubakar on Friday.

It will be recalled that the late Buhari Abubakar was until his death the District Head of Sokoto North local government and the Chiroma of Sokoto.

Speaking on behalf of the delegation, Professor Ibrahim Gambari said that the delegation was in Sokoto, to heartily extend the greetings and condolences of President Muhammadu Buhari to the Magajin Garin Sokoto and family, over the sad loss of a mother and sister.

Gambari described the deceased as a personality in her own right and said that her demise was a great loss not only to her family, to Sokoto State, but to Nigeria, in general.

He beseeched the Almighty Allah to grant her Aljannat Firdaus and give her family, people of Sokoto State and Nigerians, in general, the formidable fortitude to bear the irreplaceable loss.

Responding,  Ambassador Shehu Malami, Sarkin Sudan, said that, he felt privileged, honoured and proud to receive the all-important delegation on behalf of the family.

The Sarkin Sudan of Wurno also solicited more prayers, for the repose of the soul of the deceased.

He fervently prayed for the repose of her soul and beseeched the Almighty Allah to grant her Aljannat Firdaus and give her family the formidable fortitude to bear the irreparable loss.

He said: “This has shown that he is a leader to all Nigerians,” even as he described his late mother as a “friend, mother, sister, brother and everything to me .”

The Magajin Garin Sokoto also said that the deceased was a beacon of piety, patience, perseverance and philanthropy, while she was also a peacemaker and a bridge builder.

The visit was witnessed by Senator Aliyu Magatakarda Wamakko,  a former Governor of Sokoto State,  a former Deputy Governor and Executive Secretary,  Police Trust Fund, Alhaji Ahmad Aliyu Sokoto,  the acting Chairman of APC in the state, Alhaji Isa Sadiq Achida, other party leaders and elders, as well as some traditional and religious leaders, among others.

A prayer session for the repose of the soul of the deceased was led by the Minister of Aviation, Alhaji Hadi Sirika.

The prayer also centred on divine guidance and protection for President Muhammadu Buhari and other leaders, as well as for sustainable peace, unity and socio-economic prosperity of Nigeria.

The late Hajita Aisha died on Friday, April 23, 2021, at a Dubai Hospital, at the ripe age of 75, after a prolonged battle with diabetes.

She was the wife of the Chairman of the defunct Northern Nigeria Housing Corporation and one of the members, who represented Sokoto Province at the House of Representatives in the 1960s, Alhaji Ahmad Danbaba, Marafan Sokoto.

She is survived by five children and a younger sister, who is the last daughter of the late Premier and wife of the late Marafan Sokoto, Alhaji Umaru Aliyu Shinkafi.

Among her children is Magajin Garin Sokoto, Alhaji Hassan Ahmad Danbaba and the wife of Ambassador Shehu Malami, Sarkin Sudan.

Pantami: Buhari’s administration not serious about its fight against insurgency ― PFN