• As Gombe partners College of Horticulture on 3G project 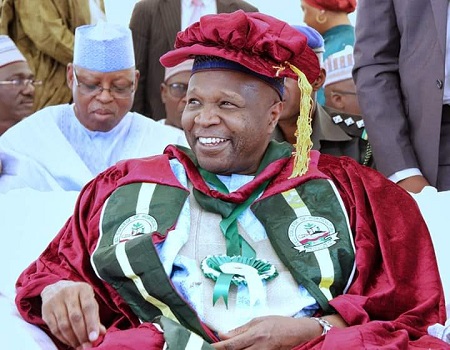 President Muhammadu Buhari has said his administration is on course to reposition Nigeria and make the country the food basket of the Sub Saharan Africa.

President Muhammdu Buhari, who was represented by the Minister of Agriculture and Rural Development, Alhaji Muhammad Sabo Nanono at the 1st combined convocation of the Federal College of Horticulture, Dadin-Kowa in Gombe state said that it is gratifying to note that the Federal College of Horticulture Dandinkowa is championing the transformation of Agriculture in the country through the promotion of its value chain.

Muhammadu Buhari said that part of his administration’s commitment to revamp the agricultural sector and make it more competitive is the proposed establishment of the National Livestock Transformation, which is set to take off soon with Gombe as the pilot state.

He then commended Gombe state governor for his show of interest in agriculture and assured of Federal Government’s commitment to supporting his endeavours.

In his speech, Gombe state governor, Alhaji Muhammadu Inuwa Yahaya, restated his administration’s resolve to partner with the Federal College of Horticulture, Dadin-Kowa in the sustenance of its flagship programme, Gombe Goes Green( 3G), which is aimed at conserving the environment and creating jobs for the teeming youths.

The governor was speaking during the 1st combined convocation ceremony and award of fellowship of the Federal College of Horticulture, Dadinkowa, held at the College premises last weekend.

He equally assured the management of the College that his administration will work with the Federal Government to ensure that the challenges confronting the institution were addressed.

He assured that Gombe state will do all it takes to support the scheme in the overall interest of the citizenry, saying Agriculture is a priority sector of his administration.

The governor who congratulated the College for a successful maiden convocation ceremony, enjoined the graduating students to make proper use of the knowledge acquired and engage in meaningful ventures that will make them self reliant instead of depending only on government jobs.

Speaking earlier, Provost of the College, Professor Fatima Sawa said that the event marked the culmination of the first combined convocation since the establishment of the College some seventeen years ago.

The convocation ceremony also witnessed the conferment of award of fellowship of the College to Governor Inuwa Yahaya, Senator Danjuma Goje and other notable Nigerians.