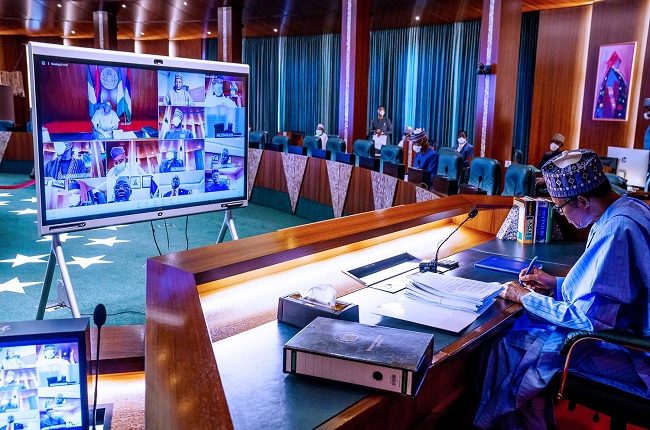 President Muhammadu Buhari is currently presiding over the 10 virtual FEC meeting at the presidential villa, Abuja.

In attendance physically with him is Vice President Yemi Osinbajo and eight ministers.

Also present are, the Secretary to the Government of the Federation, Boss Mustapha, Chief of Staff to the President, Professor Ibrahim Gambari, and the National Security Adviser, NSA, Major General Babagana Monguno (retd).

The Head of Service, (HOS) Dr Folasade Yemi-Esan and other ministers are participating from their various offices in Abuja.

Before the commencement of the business of the day, the council observed a minute silence in honour of former minister in charge of railways in the First Republic, Abdulganiyu Abdulrasaq, who died on Saturday morning.

He is the father of Governor Abdulrahman Abdulrazak of Kwara State.

The coast appears finally clear for African Development Bank President, Dr. Akinwumi Adesina to be inaugurated for a second term in the office as the independent review panel cleared him of all allegations against him by the United States of America… Read Full Story