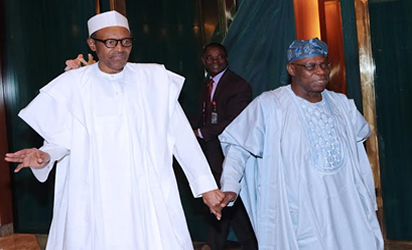 FORMER president, Chief Olusegun Obasanjo, who released a bombshell against incumbent President Muhammadu Buhari, may internationalise his opposition against the president starting from today.

The former Nigerian leader, who is at African Union (AU) event in Addis Ababa, Ethiopia, today, is likely to commence the international dimension of opposition to Buhari’s second term bid.

Sources in the polity told the Nigerian Tribune that the former president was already in the Ethiopian capital ahead of the scheduled event.

“The former president is not a man known for speaking tongue in cheek. Once he launches out, he is determined to see through whatever project, the same way he launched out against former President Goodluck Jonathan. He started by sending emissaries to him not to seek re-election but Jonathan rebuffed that.

“He wrote the 2013 letter; ‘Before it is too late,’ which marked the launch of the decimation of Jonathan’s government. A similar game is playing out here,” a source in the know said.

“I can assure you that the incumbent government has a huge hill to climb once Obasanjo has launched out, especially as he has also drawn Buhari’s immediate predecessor, Jonathan, who has emerged the hero of peaceful elections in Nigeria as an ally in the new bid. Jonathan is also a frequent guest to many world leaders and international bodies,” the source said.

The former president had, in a special press statement on Tuesday, asked President Buhari not to seek re-election but to go home and rest.

But the Presidency, in a tempered reply through the Minister of Information and Culture, Lai Mohammed, on Wednesday, said Obasanjo was largely unaware of the achievements of the administration because of his frequent travels.

In another development, the Peoples Democratic Party (PDP) has observed that the indices presented by the All Progressives Congress (APC)-controlled Federal Government in the attempt to justify its claimed achievements in almost three years of governance were cooked up and would be unhelpful to President Buhari at the 2019 elections.

PDP national publicity secretary, Kola Ologbondiyan, in a statement issued in Abuja, on Thursday, noted that the Federal Government issued misleading indices at a time it ought to be very sober for its failures.

The party said the Federal Government had refused to understand issues raised by Chief Obasanjo, adding that those issues were already trending in the minds of Nigerians and could not be dismissed with doctored reports and half-truths.

“It is ridiculous for the APC-led Federal Government to rely on an NBS report in giving an impression that the nation’s inflation rate has fallen at 15.37 per cent, while hiding the fact that inflation rate, as of May 2015, when it took over governance from the PDP, was 13.7 per cent.

“This is even as the soaring price of commodities exposes the fact that 15.37 per cent is not positive, as the APC government wants Nigerians to believe. The fact is that the APC is plunging the nation into deeper economic woes while trying to sugarcoat the issues with figures.

“The fact is that the Buhari-led APC government has overstretched the forbearance of our people just as its display of disdain to the suffering of Nigerians is unprecedented in our national history,” the PDP stated.

National chairman of the party, Prince Uche Secondus, during a meeting with former PDP Ministers Forum in Abuja, on Thursday, said the APC had failed the nation, saying that the onus was now on the PDP to save the country.

According to him, the National Working Committee (NWC) of the PDP was putting measures in place to ensure that it retrieved power from the ruling party in next election.

Secondus revealed plans by the party to embark on a massive membership drive and the establishment of online members registration.