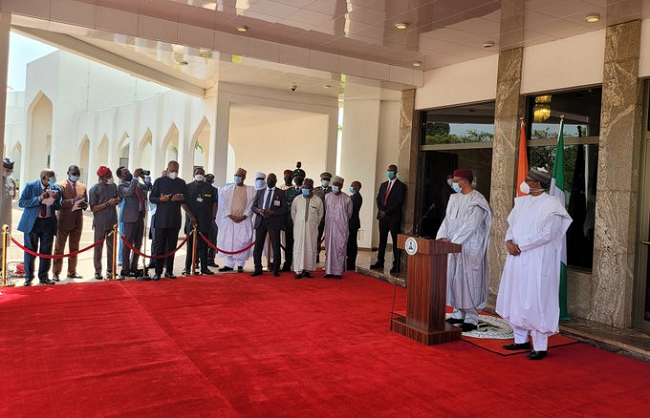 President Muhammadu Buhari has met in a closed-door meeting with his Nigerien counterpart, Mohamed Bazoum.

The meeting, which took place in his office at the presidential villa, Abuja on Monday, was also attended by seven Northern governors which including Aminu Waziri Tambuwal of Sokoto State, Prof. Babagana Zulum, of Borno, Mai Mala Buni of Yobe, Atiku Bagudu of Kebbi, Bello Matawalle of Zamfara State and Abdulahi Ganduje of Kano State.

The governors had earlier welcomed the visiting President at the Nnamdi Azikiwe International Airport, Abuja before accompanying him to the presidential villa.

President Buhari received the visiting Nigerien leader, who is on two-day official visit to Nigeria at about 1.22p.m.

Among those who joined the president to welcome Bazoum are the Chief of Staff to the President, Prof. Ibrahim Gambari; the National Security Adviser (NSA), Major General Babagana Monguno (retd), and the Minister of Defence, Salihi Magashi.

Also present are the Director-General of the National Intelligence Agency (NIA), Ahmed Rufa’i and the Minister of State for Petroleum, Timipre Sylva.

The new President of Niger Republic was sworn-in for the first five-year term after successful transfer of power on April 2.

At about 25 minutes, the train slowed down at the uncompleted Omi-Adio terminal, a village on the Abeokuta/Ibadan expressway; it’s a stone throw from Apata in Ibadan. Conveyance of passengers from there and other terminals has not kickstarted as the terminals are still under construction and workers were found there…Buhari, Nigerien President meet in Aso Rock

[OPINION] ‘Pure water’ and rising hardship in the land