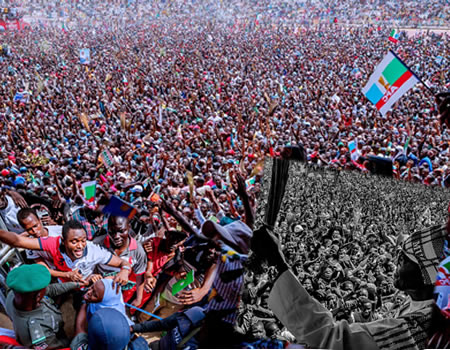 President Muhammadu Buhari has expressed sadness over the death of two persons, during his presidential campaign rally in Jalingo, Taraba State, on Thursday.

The President reacting via the @NGRPresident handle on Twitter to reports of the tragic death of some APC supporters, which was attributed to the overwhelming crowd at the Jolly Nyame Stadium, said:

“I always feel very sad and distressed when ordinary Nigerians who love me and our party because of what we stand for and have done, make personal sacrifices by taking the pains to show their support, end their lives tragically.”

While appreciating the massive support he is receiving all over the country, President Buhari called for restraint on the part of his supporters to avoid such tragic incidences and improved crowd management at rally grounds.

“I want them to stay alive and witness the dividends of purposeful governance that the APC administration will unfold when they renew our mandate,” he said.

The President also prayed the Almighty God to grant peace to the souls of the departed and speedy recovery to the injured.

Makinde to Oyo residents: Vote for all PDP candidates in February, March elections