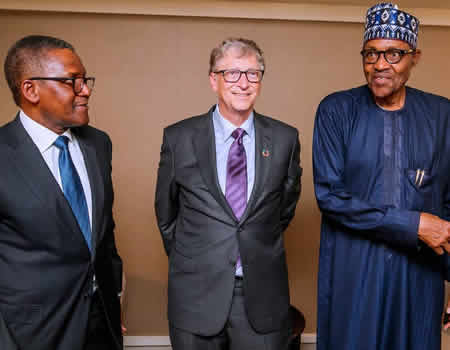 President Muhammadu Buhari has commended the contributions of Bill and Melinda Gates Foundation as well as Aliko Dangote Foundation to humanitarian and developmental activities in Nigeria.

A statement by Mr Femi Adesina, the Special Adviser to the President on Media and Publicity, in Abuja on Thursday, said Buhari gave the commendation at meeting with the duo at the sidelines of the 74th United Nations General Assembly in New York, on Wednesday.

The President said they have touched humanity in many positive ways and congratulated them “for achieving what you had set out to do.”

“Thanks for deriving pleasure in helping people. Congratulations to you for returning part of your wealth to the people in diverse ways.

“Whatever we save in areas in which you have intervened, we can deploy to other areas like the building of infrastructure,’’ he said.

On agriculture, in which Dangote makes huge investments, the President noted that farmers were very happy in Nigeria now, “as we have made fertiliser available, cut the price by half, and provided many other incentives.

“They have no regret going back to the lands. The more we invest in agriculture, the better for us.”

Bill Gates congratulated President Buhari “for assembling a cabinet that excites us,” saying that he was pleased some of the priorities of the administration were human capital development, health, nutrition and education.

While noting that Bill and Melinda Gates, as well as Aliko Dangote Foundations, keep track of Nigeria’s attainments on Sustainable Development Goals (SDGs), as enunciated by the United Nations, he submitted that they were encouraged that there was an improvement in reduction of child mortality.

“Every local government area has better health/education situation today than in the year 2000. We are delighted with that. Nigeria is our biggest commitment to Africa. It’s only in India we do more in the world,” Gates said.

On polio eradication, he said Nigeria reached a zero wild poliovirus free milestone for three years in August, adding that the next six months were critical so that the country could finally be declared polio-free.

Dangote thanked the Nigerian military for helping with “vaccination in the theatres of war while fighting insurgency, thus adding to the advances in the country’s polio status.’’

Cleric calls for prayer for Buhari to succeed, warns against agitations