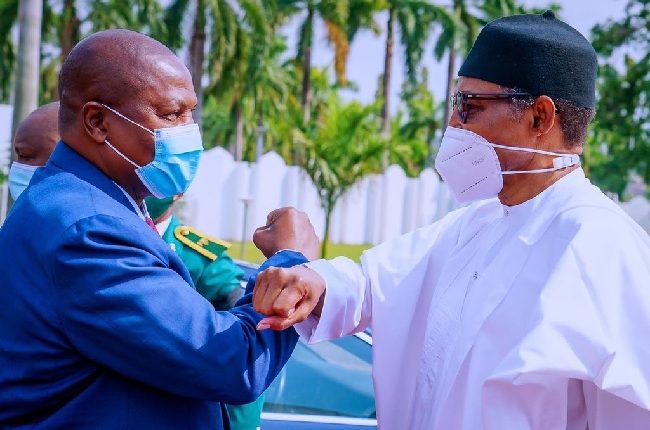 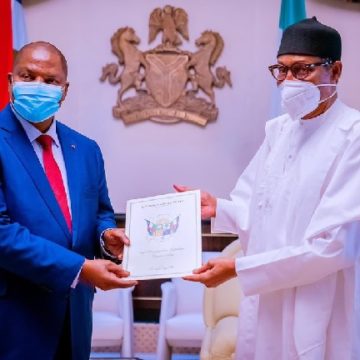 President Muhammadu Buhari, on Monday, hosted Professor Faustin-Archange Touadera, President of Central African Republic at the presidential villa, Abuja, telling him that his first concern for his people is their security and well being.

A statement issued by Femi Adesina, Special Adviser to the President (Media and Publicity) quoted the president as saying: “At all times, that is my first concern, my priority.”

“That is why we are hosting a summit of Lake Chad Basin Commission in Abuja, to discuss the situation in Chad and the implications for neighbouring countries.

“The recharge of Lake Chad with water from Congo Basin is another issue, as it holds great implications for security since about 30 million people are affected.”

President Touadera commiserated with his host over the military plane crash last weekend, which claimed the life of Lt. Gen. Ibrahim Attahiru, Chief of Army Staff, and 10 others.

He said the Central African Republic is on the verge of rebuilding its Army and would need Nigeria’s help, as well as for Nigerian businessmen to come into the country to invest in diverse areas.

“We want closer ties with Nigeria, and that is one of the reasons I am here,” President Touadera said.

“Please do not talk to my father. He is yet to come to terms with the death of his son. It is a most tragic experience. How does one quantify the loss of a dear brother? My brother was killed like an animal by two herdsmen. His offence was that he asked them to drive their cows off his already cultivated farmland,” Bisi Olaosepin, whose brother was hacked to death, struggled to hold back his tears as he relayed to Sunday Tribune the horrible experience that culminated in the passage of his brother…Buhari hosts Central African Republic president

APC Convention: We are awaiting assent of stakeholders ― Senator Akpanudoedehe