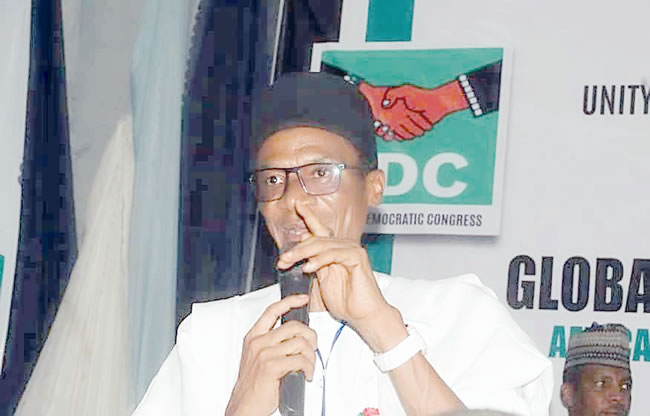 Abdul-Azeez Suleiman is the spokesperson for the Coalition of Northern Groups (CNG). He doubles as the Director General, Global Campaign Council of the African Democratic Congress (ADC). He speaks to DARE ADEKANMBI on the presidential candidates, the issues that should dominate campaigns, INEC and the Buhari administration, among others.

The presidential candidates have emerged and the campaign is about to commence. What issues would you like to see them address and give Nigerians their perspectives on?

First and foremost, what is required most are unity, justice and fairness. With justice firmly entrenched in the system, all other things would fall into place. The foundation of Nigeria’s protracted social problems is injustice and inequity.

Over time, subsequent leaderships have thrived mainly on manipulating the sensibilities of the people, leaving the country poorer and more divided.

Politicians have sought, bought and fought their ways into positions of leadership only to prove that they came to power ill-prepared and ill-equipped to rule except for their ambition for power and quest for acquisition of stupendous wealth which they flaunt with impunity.

Candidates must as well address security issues and how they plan to tackle them. By now everyone is aware that our society is getting more and more insecure, more people are getting into various forms of crimes and terrorists are getting more desperate, ruthless, and sophisticated.

In Nigeria today, new forms of violent crimes have become common. These include, armed banditry, kidnapping for ransom, pipeline vandalism, ritual killings, armed robbery and ethnic clashes. Similarly, the sect activities of both Boko Haram, the Shiites and herdsmen/farmers crises presently make Nigerians live in fear without knowing when or where crisis will erupt.   We are in this mess largely because past Nigeria’s political leaders failed to map out, profile extreme individuals and religious or social groups that were radical, but not yet violent, allowing them to grow in force.

And there is the threat of proliferation of drug abuse particularly in the North. At the risk of overstating the case, I can unhesitatingly assert that the drug situation in the North is one of the most serious social and security challenges facing Nigeria today. The fact that the problem is insidious and not readily apparent is the more reason it should be seen as an existential matter that needs to be addressed and tackled robustly and defeated once for all.

No nation can aspire to greatness or seek to remain secure and safe when its youth and the productive segments of society are left to indulge in self-destructive practices like drug and substance abuse.

National challenges such as the one we are faced with should not be treated with levity and condescension. Neither should they be seen as affecting only one region or state or, for that matter, one ethnic group or the other.

On the contrary, such challenges are cross-national issues that affect every one of us regardless of where we live or come from. For this reason, the drug problem must be confronted collectively with the entire will and resolve of the nation behind the effort. Failure to do so will indubitably mean that every effort made in isolation will defeat all our endeavours, and render our task more difficult and futile.

What will the party that you are working for, ADC, do differently in all the areas you have identified?

As the Campaign DG, I can tell you even without asking that the ADC has a comprehensive plan of actions to tackle the drug situation across the country.

Already, a working paper has been produced by the ADC which would serve as the basis for the exercise to finally eradicate the problem of drug abuse from society. The ADC working paper identified the remote and immediate reasons that have led to the escalation of the drug problem in the North and Nigeria.

It also provides a baseline study to ascertain the extent of the situation to serve as a reference to measure effectiveness of actions taken to curb it.

The ADC blueprint also examines the factors that currently exacerbate the problem as well as identifies the channels used for the importation of processed or unprocessed materials for the illegal production of the substances including domestic manufacturing locations, illegal distribution channels and other user-access routes.

It also suggests practical measures for detection, apprehension and permanent neutralization of the identified illegal industries and supply chains wherever they could be found.

The ADC therefore has defined roles specifications expected of the various government institutions in the country, including the Executive and Legislative arms of government and make suggestions for possible legislative and structural reforms.

Furthermore, we at the ADC have defined the roles expected of traditional and religious leaders and civil society organizations in addressing the problem.

On a wider scale, we endeavoured to specify the roles expected of the general public in monitoring, exposing and ensuring action against defaulters. This should include putting together a list of definitive and effective measures for reformation, rehabilitation and re-assimilation of victims in all locations. To achieve this ADC has articulated a workable framework for advocacy to effectively reach and interact with victims, vulnerable groups and other likely soft targets. We will also engage in formulating various forms of public engagements, mobilization and mass sensitization. I challenge all other parties to come up with a well-researched problem in this regard.

What’s your take on the instability in the various parties? Shouldn’t the parties have matured in the entrenchment of democratic ethos that will deepen civil governance?

The instability in the APC and PDP, the so-called major political parties, is borne out of individual greed for power which they see as an end in itself. None of the actors in those parties is fighting for the benefit of the Nigerian people.

All the faces featured on the ballots of APC, PDP, including NNPP, LP and the others are the faces of those who in one way or the other have participated in the rampage and pillage of our dear country.  The difference in all those parties is that of who has the fattest purse. They are all so poor of ideas that the only thing they have is money. That is the basis of their fight.

Unfortunately, even the smaller, otherwise promising parties, like the ADC have been infested with some elements that compromise the ideals of the parties. My party, ADC, has been deliberately dragged into an unnecessary fray by its former presidential candidate, DumebiKachikwu, but for the prompt and resolute response of the party leadership.

Beyond these moles planted in the ADC, it remains the only alternative platform capable of mobilizing younger Nigerians of all faith and all ethnic groups and prepare them for the vital task of rescuing our nation from the margins of irrelevance, impotence, inconsequence and decay in the context of a new global order which currently runs on the basis of values and practices that Nigerians need to understand, adapt to or create alternatives that suit our cultures, circumstances and interests.

President Buhari weeks ago said the job of running the country was hard work and that he could not wait for May 28 2023 to return to Daura. Is Nigeria that difficult to govern?

Certainly, the job of running a country as big as Nigeria and as complex could be hard, but it would be harder when leaders lose the necessary courage to take up issues, when leaders come to power ill-equipped and ill-prepared to lead.

In the case of Buhari, it is quite unfortunate that he has so glaringly failed to meet the expectations of the people who trusted him with power more than seven years ago. He has so quickly lost the intimidating goodwill he has had even from the mass of the people from whom he extracted the bulk of his winning votes in 2015.

But leadership will not be that tasking when leaders assume power well-prepared, well-informed and adequately armoured against undue influence by hawks who are everywhere waiting to pounce at the slightest opening and take over the remote control of the government.

In 2015, Nigerian voters trusted General Buhari to lead our nation through and out of its limitations into a future in which we will live secure lives and pursue livelihoods in a united Nigeria whose resources will be protected by leaders. When he said he belonged to no one and belonged to all, Nigerians trusted him.

Examine Buhari’s government almost eight years after he took over the running of the country.

The nation is not wrong when it insists that President Buhari’s image and vision are not being served by the quality and competence of many of the people he has assembled to work with him and see the nation through this very difficult period.

Those who insist that President Buhari’s administration can do much better in managing issues around security and the economy, in the all-important fight against corruption within the laws of the land, and in rebuilding a nation united around the values of justice and honest enterprise are certainly right.

Most of the genuine criticisms come from people who voted for Buhari because they shared his belief that we can live secure lives; that leaders do not have to steal our resources and that our children can live in, and work in a nation they can be proud of.

Unfortunately, almost eight years after he was brought to power, economic issues still linger, security situation deteriorates so must so that the nation and the world are today assessing and judging the Buhari administration against a set of incredible expectations and hopes; against even fair standards of judgment, including the judgment from his political opponents, against developments and circumstances that no one knew the nation will confront, and even against the failures and abuses the nation is having to pay for from the previous administrations.

Despite these mounting challenges, Buhari has recorded significant successes in the fight against Boko Haram, though Nigerians living far away from the effects of the insurgency may be tolerated if they downplay the significance of the successes against this murderous insurgency recorded by the administration with Boko Haram now pinned to enclaves.

We from the North, however, understand what it means, and we daily thank God that we had a change of administration in 2015, because, without a doubt, the past administration would have been routed completely by an insurgency that understood that weak political will and corruption had weakened our national resolve to fight it.

We therefore daily commend the successes of our gallant troops and the strong will of President Buhari in the fight against Boko Haram. We applaud the new spirit of cooperation among our regional neighbors, and we appreciate the support of our friends across the world who are assisting us in this fight.

We urge the government and security forces to fight this insurgency and the rampaging banditry and thriving kidnapping industry with resolve and awareness of their obligations under the law, as well as the knowledge that victory will only be pronounced when the nation achieves full cessation of hostilities, disarmament, demobilization and reintegration in the entire region.

Do you see INEC as being able to conduct free, fair and credible elections in 2023?

We are optimistic the elections would be as fair as possible considering that President Buhari himself is a product of free and fair elections. And so far, the electoral body has not given the nation to doubt its bona fides.

It is the political actors that could be the problem. With the current level of desperation exhibited by most of those so-called big parties, there may be lots of problems.

Nigeria @ 62: Paradox of poverty amid of plenty

The only route left is printing of currency and naira will become worthless —Ex-SGF,…