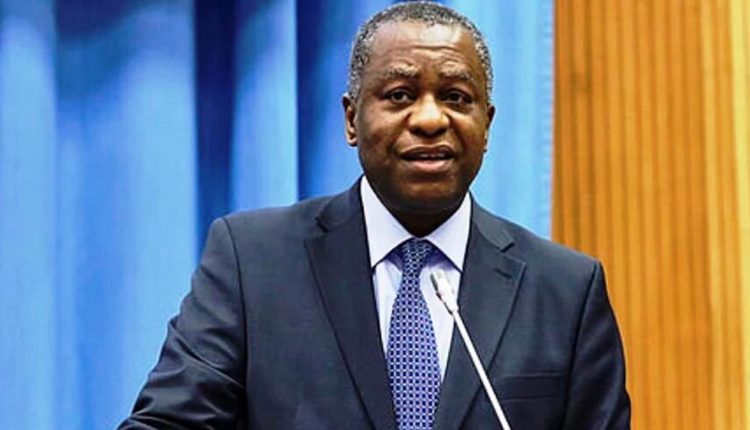 Foreign Affairs Minister, Geoffrey Onyeama, has said Nigeria was helpless in the deal it reached with the British Airways for the evacuation of Nigerian nationals from the United Kingdom.

He made the revelation on Friday at the daily media briefing by the Presidential Task Force on COVID-19.

Nigerians returnees from London were kept at the tarmac of the Murtala Airport, Lagos on Tuesday for hours while awaiting a local airline to fly them to Abuja where they were expected to be accommodated at isolation centres for mandatory 14 days.

Addressing newsmen yesterday, the Foreign Affairs Minister said the pleas by his Ministry fell on deaf ears as the British Airways insisted on flying directly to Lagos where they were expected to pick their nationals for a flight to London.

He said:” The Nigerians that were evacuated have settled in Lagos and that today( Friday) there will be another flight, a British Airways flight.

“The challenge we have with the flight is that we had wanted them to come directly to Abuja, because that’s where the passengers were supposed to be quarantined but the British insisted that the people they were coming to pick, to take back to the United Kingdom were in Lagos and if they go to Abuja, it will exceed the hours for the pilot. “So, this put us in a very awkward position and now that the plane will land in Lagos, we will have to ferry the passengers to Abuja and this requires a lot of coordination at many different levels.

“Unfortunately, we didn’t get it right and the result is that passengers have to wait for unreasonably long hours in Lagos at the airport before connecting with Abuja.”

The Foreign Affairs Minister who apologised to the Nigerian evacuees however assured that his Ministry was making arrangements that subsequent flights for Nigerian returnees would be direct to their final destination.

He further noted that the insistence by pilots flying local airlines that they be provided with Personal Protection Equipment was also responsible for the delay in evacuating the London returnees from Lagos to Abuja.

“We have been working frantically with all the different parties that are concerned to try and get these passengers who have been staying on the tarmac at the airport for long hours. This is most regrettable situation and we apologise wholeheartedly to these passengers for having put them through that.

“The latest report that I have from Lagos, is that they are ready to come to Abuja where they will then be quarantined.

“One of the challenges of course, in this whole situation we also face is that the crew complained that they also have to be quarantined for 14 days. So, a lot of aircrew and pilots don’t want to take any kind of risk that will necessitate that they be quarantined for 14 days. And the situation that happened in Lagos today, there is this protocol that has been introduced that the crew and the pilot have to wear their Personal Protection Equipment at all times and this has been introduced and so brought some issues and the pilot was not going to fly until they were provided with these PPEs.

“We haven’t had any practise of this, we are just organising things with no previous experience. So there will be some mistakes here and there and we are just doing everything we can to minimise the impact of the risks here and there. As I said, we apologise profusely for today’s passengers that unfortunately have to spend more time in Lagos and in conditions that weren’t conducive at all but we are doing everything possible to ensure quick transfer to Abuja and we hope that will certainly go more smoothly and henceforth, all the arrangements that we are doing for flights coming in will go direct to the final destination and we won’t have to grapple with complications like this where the plane stops in one city and we have to now ferry passengers to another city. “Hopefully we won’t be confronted with this kind of situation again. ”

Ogun extends lockdown by another one week