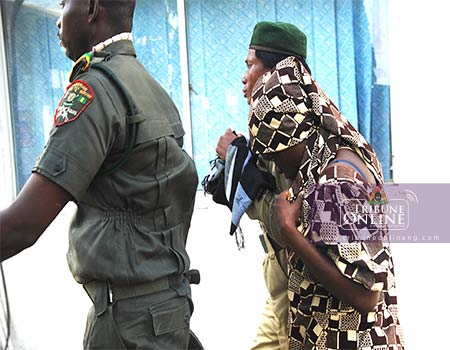 Yewande Oyediran standing trial for allegedly killing her husband after a fight between them at their Ibadan home, had been sentenced to seven years imprisonment for manslaughter a the Oyo State High Court sitting in Ibadan, on Monday.

Justice Munta Abimbola of the Oyo State High Court sitting in Road, Ibadan, delivering judgement on the case, said the manslaughter submission was admitted because it was a marital squabble and not premeditated.

Justice Abimbola had at the last hearing in October reserved judgment while adding that hearing notices will be served on all interested parties to inform them of the reserved date at the appropriate time while he commended the media for being objective in their report on the matter and for not engaging in sensationalism while the matter lasted.

Earlier while adopting their written addresses, the defense led by Leye Adepoju, had informed the court that they had done all that is required of them under the law within the stipulated time. “At the end of the last hearing, the court ordered that we file written addresses within a specific time frame, the defense did this in strict compliance with the order of court and on June 15, 2017, we filed our written addresses and the prosecution reacted by filing their address on June 30 while we relied on point of law on July 10, 2017. I crave the indulgence of the court to adopt the final address of June 15,” Adepoju said.

He added that three issues were raised for determination and arguments were proffered for all the issues raised, praying the court to allow him adopt all the arguments, adding that the reply of the defense on point of law also addressed all issues raised by the prosecution in its written address and sought the leave of court to take it as his address.

Adepoju however reiterated that issues raised in the matter could only be resolved by one issue, who stabbed the deceased? He added that evidence before the court shows clearly that the victim is dead adding that medical records have shown clearly that the injury close to the neck which the prosecution states was caused by a knife (Exhibit B) caused the death and not that of the scissors. “That being the case, who caused the injury close to the neck since the scissors wound is a non-issue. The prosecution contends that the defendant caused the injury and relied heavily on Prosecution witness four and five who they described as eyewitnesses.

“We submit that neither of the star witnesses was an eyewitness as they did not see who stabbed the deceased. Exhibit B which allegedly is the instrument of death has no blood stains as proof and more damaging is that the defendant has in no way been linked to the knife as no cross-matching of fingerprints were done to controvert our assertion that she did not touch the knife.

“Such yawning gap show they haven’t proved the case beyond a reasonable doubt as the PW4 presented an array of lies and cannot be said to be a credible witness, the prosecution has not shown that the defendant touched the knife and no mathematical precision was given to tie the defendant to the knife.

“We contend that the prosecution did not prove its case beyond reasonable doubt as the onus lies on them to prove the case and the defendant is presumed innocent until proven guilty. I urge the court to dismiss the charge and also discharge and acquit the defendant,” he concluded.