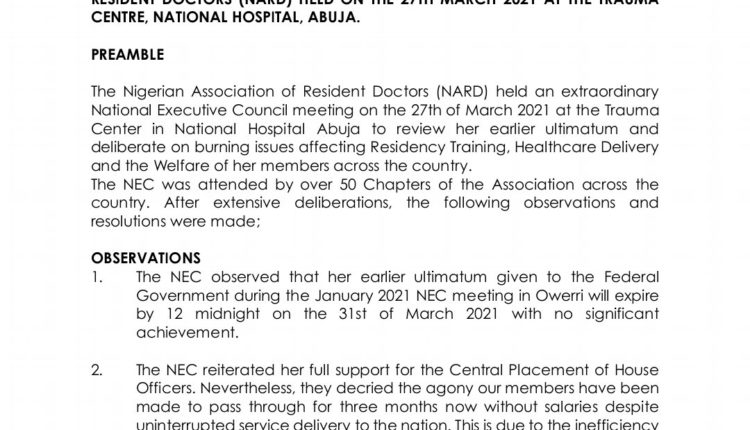 Nigerian Association of Resident Doctors (NARD) will begin what it called a “total and indefinite strike” on Thursday, April 1, except the Federal Government moves swiftly to stop the industrial action.

Already, the Nationsl Executive Council (NEC) of NARD had unanimously agreed to proceed on the strike by Thursday if their demands are not met.

The decision to go on strike was made after an extraordinary NEC meeting held on Saturday at the Trauma Centre, National Hospital, Abuja.

The NEC was held to review its earlier ultimatum and deliberate on issues affecting Residency Training, Healthcore Delivery and the welfare of its members across the country. 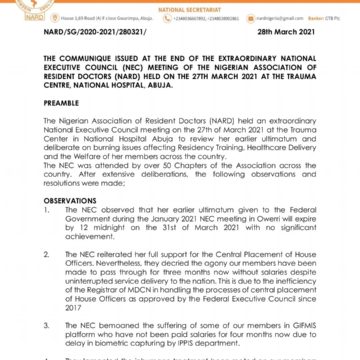 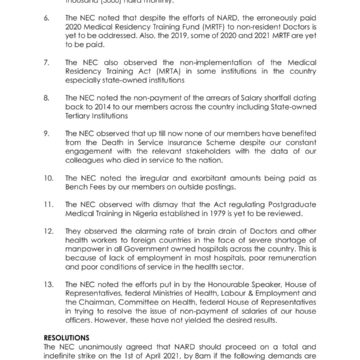 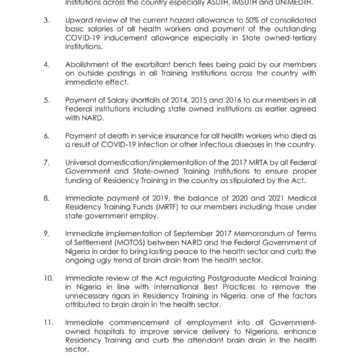 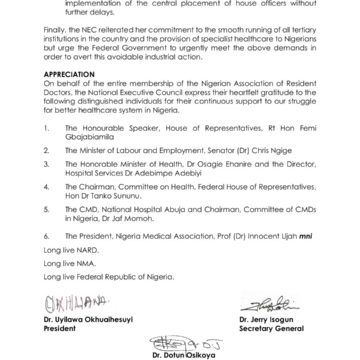 According to a communique issued after the meeting, the NEC observed that its earlier ultimatum given to the Federal Government during its January NEC meeting in Owerri, Imo State, will expire by March 31, with no significant achievement.

In the communique signed by the NARD President, Dr. Uyilawa Okhuaihesuyi; the Secretary, Dr. Jerry Isogun and the Publicity Secretary, Dr. Dotun Osikoya, the NEC reiterated the full support of NARD for the central placement of house officers.

“Nevertheless, we decry the agony our members have been made to pass through for three months now without salaries despite uninterrupted service delivery to the nation. This is due to the inefficiency of the Registrar of Medical and Dental Council of Nigeria (MDCN) in handling the processes of central placement of House Officers as approved by the Federal Executive Council since 2017,” the communique said.

The communique added: “The NEC unanimously agreed that NARD should proceed on a total and indefinite strike on the 1st of April 2021, by 8:00 a.m. if the following demands are not met.”

Some of the demands include immediate payment of all salaries owed to all house officers including March salaries, regardless of quota system, before the end of business on 31st of March 2021:

“Immediate payment of all salaries arrears including March salaries for our members in all Federal (GOFMIS platform) and state tertiary health institutions across the country especially ASUTH, IMSITH and UNIMEDTH.

“Upward review of the current hazard allowance to 50 per cent of consolidated basic salaries of all health workers and payment of the outstanding COVID-19 inducement allowance especially in state-owned tertiary institutions.”

In the penultimate week, (March 7 – 13), there were 2,300 cases, a reduction when compared to the 2,817 recorded in the previous week’s (February 28 – March 6)…BREAKING: Resident doctors declare “total and indefinite strike”, to begin from April 1