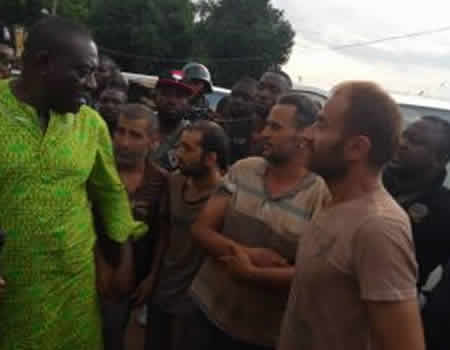 The police command also said that four members of the kidnap gang have been arrested, saying that others are still at large.

Addressing journalists on the rescue operation alongside the Chief of Staff to the state governor, Mr Adisa Logun, the state commissioner of Police, Kayode Egbetokun, said that the rescue was made possible by the support received from the Inspector General of Police and the local vigilante group.

“The Command has been working round the clock since they were abducted with the local vigilante and the IGP anti-kidnap and intelligence team, our own anti-kidnapping and anti-robbery squad and Operation Harmony as well as Fulani group around the area.

“Four of the gang members have been arrested while others are still at large. The arrest that we made put pressure on other members of the gang to release the abductees.

“The kidnappers initially demanded for N400 million but they later reduced it to N100 million but I want to say here that no ransom was paid in the release of the hostages,” the CP said.

While thanking everybody involved in the rescue of the hostages, like the Fulani group in the area, vigilante group, state government and people of the state, Egbetokun said that the abductees would be flown to Abuja immediately.

According.to him, “Police doctor is attending to them and they would be taken to Abuja where they will be released to their company. I also want to add here that the kidnapping took place at Gwugwu not Gbale as we earlier said.

The hostages have been flown to Abuja as at the time of filing this report.

How political power damages the brain — and how to reverse it