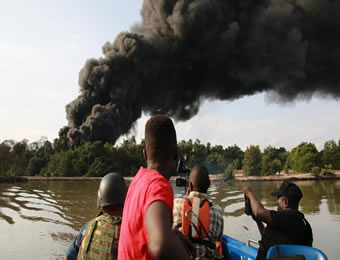 The well head and illegal refinery camp, located at Usele village in Beneth Island of Warri South Local Government Area  of the state, harboured a large reservoir where crude oil siphoned from the well head is stored.

The vandals, including children, young men and parents from the community fled into the creeks on sighting operatives of the navy.

The naval operatives, led by Commander Shehu Tasir, who is the Base Operations Officer (BOO), siad the well head was connected with a large hose through which crude oil was being siphoned into the large reservoir.

The reservoir of crude oil was set ablaze by the naval operatives after it was cordoned off to avoid a backlash on the villagers who had all taken to their heels I to the woods.

Commander Tasir, who expressed shock at the site of illegal refinery and the ingenuity of the perpetrators, said there existed a nexus between pipeline vandalism and crude oil theft as demonstrated in the incident.

He said the navy was not asleep, but would continue with the battle against crude oil theft and pipeline vandalism as well as other criminal activities at all costs.

The naval boss warned that his patrol men would continue to hunt down vandals for all shades who have continued to perpetrate illegalities and criminalities in the creeks.

“Today, our patrol team was informed about illegal refinery site somewhere around Usele village close Benneth Island and we moved in and what we saw was astonishing.

“It was an underground storage tank loaded with crude oil with the size of six standard rooms and there was a pipe connected direct through a well head and it was pumping continuously into the pit.

“The quantity of crude oil in the pit at the time our men got there was about 2,000MTs and a pipe was connected from the storage point which was hidden,” he noted.

Commander Tasir admonished people of the area to shun illegal activities, saying the Federal Government’s initiative for peace in the Niger Delta region was not a reason for vandals to continue to vandalize pipelines or engaging in crude oil theft.