Latest NewsWorld News
By Tribune Online On May 26, 2020 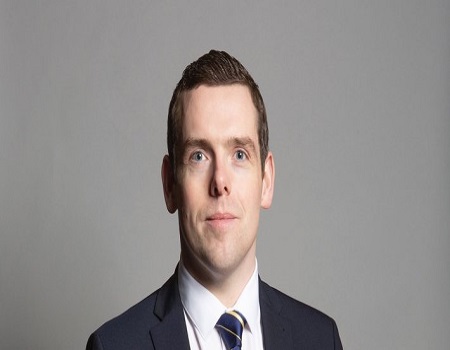 A government minister has resigned over Dominic Cummings’ lockdown trips, piling more pressure on the prime minister to sack his top aide.

Douglas Ross said the embattled adviser’s claim he had a valid excuse to travel during the coronavirus outbreak was “not shared by the vast majority of people who have done as the government asked”.

In a letter to Boris Johnson published on Tuesday morning, the outgoing Scotland Office junior minister wrote: “I have never met Dominic Cummings so my judgement on this matter has always been open and I accept his statement on Monday afternoon clarified the actions he took in what he felt were the best interests of his family.

“However, these were decisions many others felt were not available to them.

“As a father myself, my instinct is to always do what is best for my son and wife. We have been fortunate not to have caught this awful virus but if we did, we are prepared to follow the government advice and stay at home to contain this virus.

ALSO READ: ‘I don’t regret what I did,’ says British PM’s top aide on lockdown row

“While the intentions may have been well-meaning, the reaction to this news shows that Mr Cummings interpretation of the government advice was not shared by the vast majority of people who have done as the government asked.

“I have constituents who didn’t get to say goodbye to loved ones; families who could not mourn together; people who didn’t visit sick relatives because they followed the guidance of the government.

“I cannot in good faith tell them they were all wrong and one senior adviser to the government was right.”
His letter was followed minutes later by praise by the former Scottish Tories leader Ruth Davidson, who said she was “sorry” to see a “talented” minister go.

The resignation of an MP considered a rising star will pile further pressure on Mr Johnson to sack his top aide.

The prime minister has stood by Mr Cummings for moving to his parents’ farm in Durham from London at the start of March while Britons were told to “stay at home” at the start of lockdown.

The Downing Street adviser said he would not apologise, had no regrets and had not considered resigning at an unprecedented Downing Street news conference on Monday.

So far at least 20 Tory MPs, as well as bishops and NHS staff, have demanded Mr Cummings be sacked.

(SPONSORED): Jobs in Nigeria: How the government can mitigate job losses during and after COVID-19