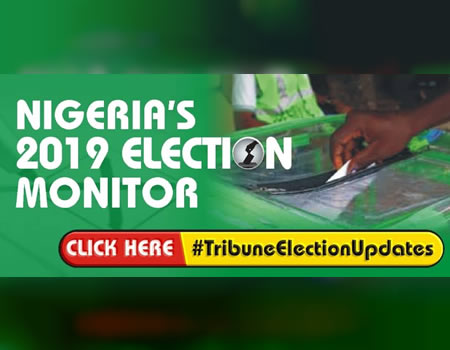 Share
The Independent National Electoral Commission (INEC) early Monday morning declared Saturday’s governorship election in Bauchi State inconclusive, just as the electoral body has, therefore, ordered a rerun election in Tafawa Balewa Local Government Area to be conducted within the next 21 days.
Rerun election,according to the electoral umpire, will also be held in all polling units across the state where election was cancelled.
While announcing the outcome of the keenly-contested election at about 12:13 am, at the INEC state office in Bauchi, which served as state collation centre, the state Returning Officer, Professor Mohammed Kyari, of the Federal University of Technology, Yola, Adamawa, stated that the election was inconclusive because according to him, the difference between the two top contenders, Governor Mohammed Abdullahi Abubakar of the APC and Senator Bala Mohammed of the PDP was not up to the number of registered voters in Tafawa Balewa LGA, which results had earlier been cancelled.
The local government has a total of 139, 240 registered voters.
The Returning Officer announced that Governor Mohammed  Abubakar polled a total of 465,453 votes, while Senator Mohammed, a former FCT Minister polled a total of 469,512 votes.
Professor Kyari Mohammed declared that the difference between the two is 4,059 votes.
The results as announced by the electoral body are: BOGORO: APC – 7,442, PDP – 19,667; DASS: APC – 15,388, PDP – 12,411; KIRFI: APC – 15,562, PDP – 15,408; GIADE: APC – 17,004, PDP – 11,391; WARJI: APC – 17,939, PDP – 17,022; MISAU: APC – 16,282, PDP – 19,928; JAMA’ARE: APC – 12,901, PDP – 11,041.
Others are: ALKALERI: APC – 27,238, PDP – 34,625; ZAKI: APC-23,179, PDP – 24,582; DAMBAM: APC – 11,383, PDP- 11,846; GAMAWA: APC – 27,462, PDP – 18,998; SHIRA: APC – 23,061, PDP – 19,296; ITAS-GADAU: APC – 23,670, PDP – 20,054; KATAGUM:APC – 27,820, PDP – 26,666
And others are Toro: APC-57,655, PDP- 31,284, Bauchi APC-56,663, PDP-102,467, Kanjuwa:APC-24,687, PDP-23,588 and Darazo, APC-24,240, PDP-19,899.
Meanwhile, the Bauchi State Government has declared that only the Independent National Electoral Commission (INEC) is statutorily empowered to announce election results.
As such,any announcement by individuals amounts to incitement and attempt to breach  public peace .
The government in a pres release signed and issued by the Special Adviser to the Governor on Media and Public Strategy, Ali Mohammed Ali stated that,  “Sequel to the above ,the general public are hereby advised to stop making provocative and inciting statements that could lead to breakdown of law and order in the state. The government implores all citizens to remain calm and law abiding pending the official announcement of the final result”.
It would be recalled that the Gubernatorial Returning Officer, Professor Kyari Mohammed had late Sunday announcement the cancellation of the gubernatorial election results in Tafawa -Balawa due to what he described as electoral malpractice.
It was earlier reported that there was a mild drama on Sunday evening  inside the Prof. Mahmood Yakubu Conference Hall, at the Bauchi INEC Headquarters venue of the Collation of results of last Saturday’s gubernatorial election when the Returning Officer of Tafawa Balewa Local Government Area declared that she announced the results of the election under duress to save her life from the hands of suspected political thugs who invaded the collation centre on Saturday night.
The confusion started when the State Returning Officer of the Governorship election, Prof. Kyari Mohammed, called the Collation Officer for Tafawa-Balewa LGA to step forward and announce the results with her and immediately, an agent of the APC, Col. Umar Tilde, raised an observation that there was no collation of results  in the Local Government Area therefore it should not be accepted.
The Returning Officer then asked the Collation Officer, Mrs Dominion Anosike, of the Federal Polytechnic, Bauchi to explain what happened and she shocked the gathering when she said that she announced the results at the collation centre on Saturday  under duress.
She explained further that  there was violence at the Local Government Collation Center and the election materials particularly the result sheets were carted away adding that “Police and other security personnel around had to rescue us because our lives were in danger at the moment”.
She added that : ” We started Collation of the results at about  11pm on Saturday and after collating results of 6 wards, some hoodlums stormed the area around 6am, and insisted that we must announced  the candidate of a particular party as the winner of the gubernatorial election”.
Dominion Anosike who was still looking afraid added that, “I had to announce the results under duress because they insisted that we must announce it. Since the results were carted away, I had to announce the result we had in a laptop after comparing it with the results of the agents there at center.”
She further explained that with the kind of violence there and the so much pressure there, she had to announce it like that but insisted though that the final results she wanted to announce was genuine but this further threw the Collation Center into an uproar with the insistence that she did everything under duress .
Col Tilde (rtd) , again stood up and insisted that: “the result she announced there was given to her from a laptop. We will not accept it.”
The Returning Officer, Prof. Kyari then intervened and said that since Dominion Anosike said the result were genuine and have been brought it in from the Polling Units to the Ward and the Local Government Collation Center, he will give a final verdict later.
He then called the Collation Officer of another Local Government to step forward and announce his own results after which, the session went for a 45 minute break for the problem to be sorted out.