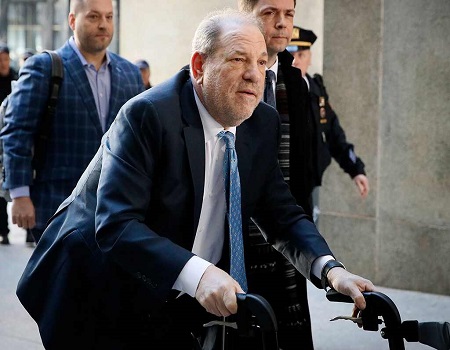 Harvey Weinstein was sentenced to 23 years in prison on Wednesday following his rape and sexual assault conviction.

Weinstein arrived at the Manhattan Supreme Court in a blue suit. His accusers, including all six of the women who testified against him, were also there and sat in the front row. They were greeted with applause upon their arrival.

Before the sentencing was announced, prosecutor Joan Illuzzi-Orbon thanked Judge James Burke, the media and the accusers and asked for Weinstein to be sentenced “to the max or near the max.” Jessica Mann and Mimi Haley also addressed the court. Haley, a former Project Runway production assistant who claimed Weinstein assaulted her in 2006, said she had been scarred “deeply, mentally and emotionally.” Mann, who accused Weinstein of rape, also described the impact.

“I’m forced to carry that experience until I die,” the actress said, describing it as a “recurring nightmare.”

Donna Rotunno, Weinstein’s lawyer, also spoke and asked for Weinstein to be given the minimum sentence. Weinstein also addressed the court. He said he “prayed for all of you through this crisis.” In addition, he said “men are confused about these issues” and that he’s “worried about this country.”

On Feb. 24, a jury found the convicted mogul guilty of third-degree rape and criminal sexual act in the first degree for attacks on Mann and Haley. He was found not guilty on two counts of predatory sexual assault and one count of rape in the first degree.

Weinstein has been accused of sexual misconduct by more than 80 women, which helped spark the #MeToo movement in 2017. Since then, he has denied all accusations of non-consensual sex.

Following the verdict last month, Weinstein was handcuffed and taken out of the courtroom. A request from his attorney for Weinstein to remain on his current bail package was denied at the time.

According to CNN, Weinstein’s defence attorneys were “requesting a five-year prison sentence, the minimum for his first-degree criminal sexual act conviction” because of his “personal charitable giving, advanced age, medical issues and lack of criminal history.”

“Given his age and specific medical risk factors, any additional term of imprisonment above the mandatory minimum – although the grave reality is that Mr Weinstein may not even outlive that term – is likely to constitute a de facto life sentence,” the letter from Weinstein’s defence attorneys continued.

Most recently, the 67-year-old former producer underwent heart surgery and was moved from a New York hospital to the city’s Rikers Island jail complex ahead of today’s sentencing. E! News confirmed Weinstein had a stent implanted to alleviate a blockage.

Further, Weinstein is also facing four sexual assault charges in Los Angeles, Calif, where he is accused of raping an unidentified woman in her hotel room and allegedly sexually assaulting a different woman in a Beverly Hills hotel suite the following evening.

According to County District Attorney Jackie Lacey, per a press release, Weinstein was charged with one felony count of each alleged forcible rape, forcible oral copulation, sexual penetration by use of force and sexual battery by restraint. The rape and sexual assault incidents allegedly took place in February 2013.

According to Weinstein’s rep, per Reuters, he had suffered from pre-existing conditions prior to his trial-diabetes and high blood pressure and was also pictured attending hearings using a walker.

Coronavirus : Govt begins distribution of sanitisers to schools in Ekiti