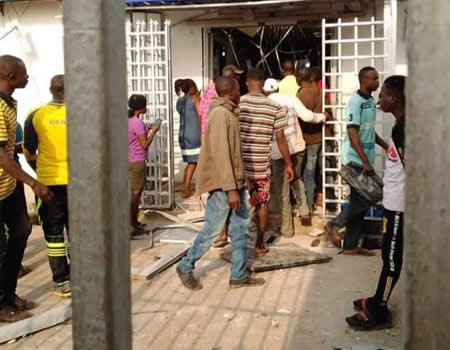 The armed men who invaded the two banks simultaneously around 3:55 pm left two customers of the banks and two policemen dead.

An eyewitness explained that the robbers overpowered the security operatives attached to the bank, killing them before gaining access into the bank.

He said one of the policemen was shot inside the vehicle while another one was shot in the head, leaving him in his pool of blood.

He said the armed robbers gained access into the bank by blowing off the security doors of the two banks with dynamites before taking control of the bank, holding many customers as hostages.

He said the robbers who gained access into the two banks which are located in the same area, made away with an unspecified amount of money from the vault of the bank.

Customers of the bank, who were inside during the incident were also robbed of valuables while residents of the town ran for safety over the fear of stray bullet.

He said the armed robbers operated unhindered and shot into the air to scare away the residents while local hunters from the town chased the robbers.

He said some policemen arrived at the venue of the incident after the incident while military men from the state also visited the banks after the robbery.

He, however, said the identities of those that were killed by the robbers cannot be confirmed as at the time of filing in this report.

He said “the casualties are still sketchy, I cannot confirm the number of casualties for now but men from the command are on the trail of the robbers.