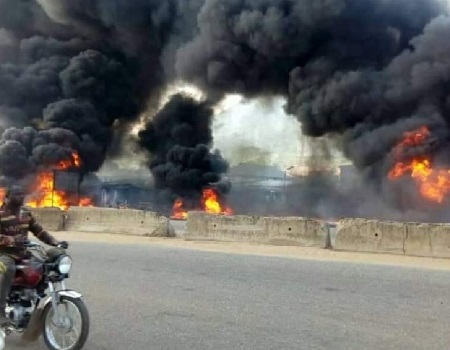 Five persons have been confirmed dead Monday morning, in a fire accident involving a petrol-laden tanker and other vehicles in Felele, Lokoja along Lokoja-Abuja highway in Kogi State.

Many vehicles including a tricycle popularly called “Keke NAPEP” were burnt as the tanker exploded after the accident, also leaving many people injured.

Tribune Online who visited the scene gathered that the petrol-laden truck lost control as it was descending at the NNPC station when the break of the truck failed.

ALSO READ: Obey all safety rules as the year draws to an end – FRSC urges motorists

However, men of the Fire Service have arrived the scene of the accident to put off the fire.

Also, officials of the Federal Road Safety Commission (FRSC) were on ground to evacuate those who died while injured people have been rushed to a hospital in Lokoja.
Attachments area