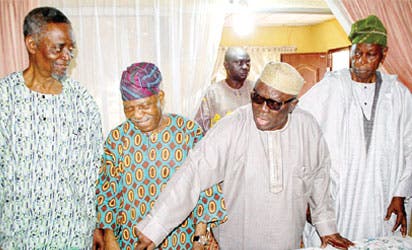 Chief Ayo Adebanjo has been named as the Acting leader of the Yoruba sociopolitical group, Afenifere.

The leader of the group, Chief Reuben Fasoranti, who dropped this hint during the meeting of the group in Akure, the Ondo state capital, said it’s time for him to step down.

Fasoranti said the development became necessary “as the group needs more than ever before to have an improved organisation with more effective approach to combat the monstrous invasion of our culture and pride as a people.

“Only a more alike and active leadership can achieve this. At 95, I am hardly able to provide such and so, it is time for me to step aside.

“At this junction, I am proud to announce Chief Ayo Adebanjo, a politician of the Awolowo school of thought as acting leader of Afenifere and His Royal Highness, Oba Oladipo Olaitan, the Alaago of Kajola Ago in Atakumosa East Local Government Area, as the Deputy Leader.

It would be recalled that the former leader of the group, Senator Abraham Adesanya, in 2008 named Fasoranti as the leader of Afenifere

At about 25 minutes, the train slowed down at the uncompleted Omi-Adio terminal, a village on the Abeokuta/Ibadan expressway; it’s a stone throw from Apata in Ibadan. Conveyance of passengers from there and other terminals has not kickstarted as the terminals are still under construction and workers were found there…BREAKING: Fasoranti steps down as Afenifere leader, Ayo Adebanjo named as acting leader