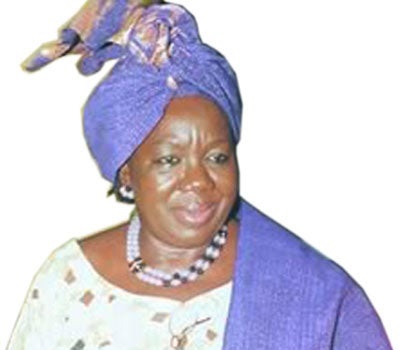 Share
Former Presidential Adviser on Women Affairs to former President, Chief Olusegun Obasanjo, Dame Titilayo Ajanaku died at 73.
Details about her death were still sketchy at the time of filing this report, but Tribune Online gathered that the political amazon succumbed to death having battled with cancer
The late Ajanaku was until her death the Otun Iyalode of Egbaland.
The deceased a trained nurse, politician, administrator and women leader was born on 25th January 1946 at Àgọ́-Òdo Quarters Abeokuta, Ogun State.
She attended Nawair-Ud-Deen Secondary School, Abeokuta, She Trained in Nursing at Stobhill General Hospital, Nether-Edge City General Hospital, Sheffield, UK, 1964 – 1965.
She was Staff/Midwife, General Hospital, Surrey England, 1966. Domiciliary Midwife in London Borough of Croydon, 1967. Staff Midwife at University College Hospital, London, 1968-1969.

She was Midwife Sister at Wesley Guild Hospital, Ilesa, Nigeria, University of Ife Teaching Hospital Complex (now Obafemi Awolowo University Teaching Hospital), Wesley Guild Hospital Branch. She was Member of the National Association of Nurses and Midwives of Nigeria.
Chief (Mrs) Ajanaku was known as a foremost political activist and first came into the national limelight when she emerged against all odds as Chairman (old) Abeokuta Local Government, Ogun State, under the zero-party arrangement. She defeated about ten (10) men lined up as candidates at that election. Indeed she was the first woman elected as Local Government Chairman in Nigeria.
She was also in the vanguard of G-34 which metamorphosed into Peoples Democratic Party (PDP) which was later hijacked by the Military politicians and aristocrats. She was also one of the top politicians arrested and arraigned before the Patrick Aziza chaired 1995 “Abacha the Beast” phantom coup.
Matron, Nigerian Youth Organisation, Ladies Club of Nigeria, Abeokuta Central Lions Club, Current Affairs Association of Nigeria.
Iyalode-Oba of Igbesa; Iya-Oge of Ogbere, Ijebu-East; Iyalode Oke-Ona, Egba (2001), Otun-Iyalode of Egbaland.
aideEx-PresidentialObasanjoTitilayo Ajanaku
Share FacebookTwitterGoogle+ReddItWhatsAppPinterestEmail