The House of Assembly by-election for Ekiti East Constituency one in Ekiti State was on Saturday marred by violence as political thugs unleashed mayhem on voters and security agents.

The seat became vacant following the death of Juwa Adegbuyi in February who represented the constituency. 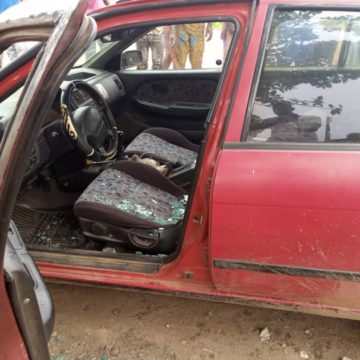 Tribune Online who monitored the election observed that three persons including a policewoman have been killed by the political thugs allegedly sponsored by the ruling All Progressives Congress (APC) while about five persons are receiving treatment from a private hospital.

The shootings happened three hours into the poll at Ward 7, Unit 7 of the Senator representing Ekiti South, Biodun Olujimi. The senator only escaped by whiskers as the political thugs went on rampage in her polling units.

The British Parliament at the Westminster Hall held a debate on ‘e-petition 554150, relating to Nigeria and the sanctions regime’ on Monday. The government of the United Kingdom has however responded…Ekiti by-election  Ekiti by-election

The surprise visit made on Friday night by the leaders of the ruling All Progressives Congress (APC) to former President Goodluck Jonathan at his residence in Abuja triggered a stir in the major political camps, resulting in at least four possible theories…Ekiti by-election  Ekiti by-election

“Please do not talk to my father. He is yet to come to terms with the death of his son. It is a most tragic experience. How does one quantify the loss of a dear brother? My brother was killed like an animal by two herdsmen. His offence was that he asked them to drive their cows off his already cultivated farmland,” Bisi Olaosepin, whose brother was hacked to death, struggled to hold back his tears as he relayed to Sunday Tribune the horrible experience that culminated in the passage of his brother…Ekiti by-election  Ekiti by-election

Residents scamper to safety as cultists kill one in Osun