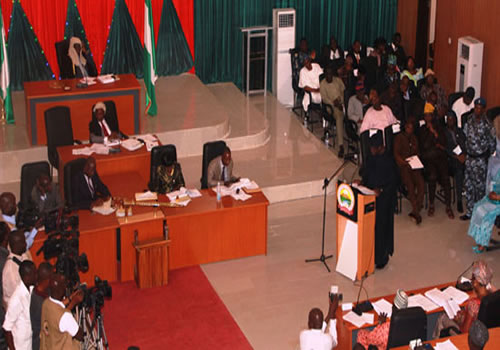 THE Ekiti State House of Assembly, on Tuesday, suspended all the local government chairmen and the 177 councillors in the state indefinitely, citing alleged financial irregularities in running the councils.

The chairman of the House Committee on Information and Leader of Government Business, Chief Gboyega Aribisogan, who addressed newsmen, said the assembly also suspended all the other top political officials of the 16 local government councils.

The chairmen and councillors were inaugurated by the immediate past administration in the state headed by Peter Ayodele Fayose, on December 19, 2017, following their election.

All the chairmen and councillors were elected on the platform of the Peoples Democratic Party (PDP), on December 16th.

According to Aribisogan, the action of the house was taken in line with Section 7 of the 1999 constitution and Section 82 of the Assembly’s Standing Order.

He said the members arrived at the decision following a resolution at a plenary, also on Tuesday.

He said at the sitting, it was resolved that the Auditor-General of the local governments must begin forensic audit of all accounts to pave the way for more actions by Governor Kayode Fayemi.

Aribisogan claimed that a report by the Public Accounts Committee saddled with the responsibility of probing the finances of the councils, which he said was in line with Section 82 of the 1999 constitution, contained alleged infractions in form of misappropriation, diversion and contract inflation, which he said the House could not overlook.

He said they had worked on the documents submitted to the house and “we realised that the council bosses went on their way to use direct labour for projects that go beyond their approval limits, making them conduit pipes to massively loot the third tier of government.”

He further alleged that “the ineptitude, corruption, misappropriation, diversion and outright looting discovered in the reports saddened us that the third tier of government was badly managed by these local government elected officials,” claiming that “they showed that they were there to fend for themselves and not the people.”

Aribisogan said: “Section 7 of the 1999 constitution stipulated that the House of Assembly shall make laws for the good governance and operations of the councils, including agencies not contained on the exclusive list.

“We hereby resolved that the chairmen of the 16 local government councils, their appointed officials and all councilors be placed on an indefinite suspension to pave way for a forensic audit of the accounts, for their continued stay in office will obstruct the course of investigation.

“We saw cases of over-invoicing and contract inflation and there were evidence of how they awarded contracts to families and their cronies. We are not going to spare anyone, including the career officers. Whoever that is culpable will be sanctioned. But they have the liberty to go to court to challenge our action.

“The suspended officials should hand over government properties in their possession to the Directors of Administration.

“We also resolved that appropriate sanctions will be meted out to any erring elected or appointed and career officers that are found culpable in the misapplication, misappropriation and diversion of public funds.”