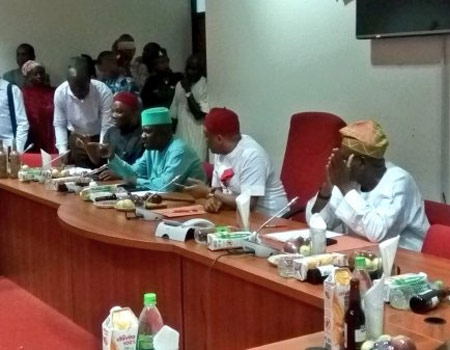 The Vice Chancellor of Ahmadu Hello University (ABU), Professor Ibrahim Garba, has confirmed that Senator Dino Melaye graduated from the institution in the 1998/1999 academic year.

Garba appearing before Senate Committee on Ethics, Privileges and Public Petitions, on  Monday morning, said Melaye graduated with a Third Class Bachelor of Arts degree in Geography in 2000.

The VC’s intervention before the Senate committee probing into the alleged certificate scandal involving Melaye seems to have cleared the air on the lingering matter.

Answering questions on allegation of forgery against Melaye, Garba affirmed that from records available to him, Melaye graduated in Third Semester of the 1998/1999 academic year.

“From the records, I know Dino Melaye, who was formerly known as Jonah Daniel Melaye as former student of Ahmadu Bello University, Zaria and I know him to be the distinguished Senator of the Federal Republic of Nigeria.

“Melaye, who was at that time named Daniel Jonah Melaye, graduated with a third class degree of the Bachelor of Arts in Geography in 2000. And by this, he is a graduate of the university.

“In my honour, I reaffirm that Melaye graduated as Daniel  Jonah Melaye during the third semester  of the 1998/1999 academic session  with a Third Class Degree in Geography, that is Bachelor of Arts in Geography,’’ he stressed.

Responding to questions from the committee, Sen. Dino Melaye (APC-Kogi), said the allegation that he did not graduate from the Ahmadu Bello University was untrue.

He said he had evidences to show that he was a proud graduate of the school and currently a student in the school undergoing a Masters  Degree programme.

“I thank you for the invitation and I want to state my unequivocal confidence in this committee to do justice to this matter.

“I have few documents I would also want to tender to the committee and before I do that, I also want to state with every sense of responsibility that I am a graduate of Ahmadu Bello University, Zaria.

“I gained admission on the 6th of September, 1994 and the admission is to study Bachelor of Arts, Geography and a copy of that admission letter will be tendered.

“I also have here a document for my registration that I tendered  where I have C5 in CRS, A3 in Agriculture, C6 in Economics, C6 in Geography, C6 in Biology and a credit in English Language.

“After my graduation for the Ahmadu Bello University, the school sent my name to the NYSC for the mandatory service and I participated in the one year NYSC.

“I served in Police College, Kaduna and by the grace of God, that year I won the National Prize of the DG and it is on record and verifiable and I beg to tender my Discharge Certificate from NYSC’’, he said.

The lawmaker added that with the desire to further his education, he applied to the school to send his transcript to University of Jos, where he studied Law, Security and Conflict Management.

He said he also applied to the school to send his transcript to University of Abuja where he gained admission to study Masters in Policy Analysis.

On allegations that he bore several names at different times, Melaye said, “when I went back to Ahmadu Bello University to study for Masters in International Relations and Diplomacy, I was already known all over as Dino Melaye.

“My name as an undergraduate was Daniel Jonah Melaye. Jonah is actually my father’s name, so that is what I have on my university certificate.

“But Because I am now popularly known as Dino, I applied to the court and asked that I needed an affidavit for change of name before my admission and I submitted it to ABU.

“I will tender my identity cards and I came here with a copy of my final year project duly signed by my head of department in the Faculty of Arts as it was then called’’, he said.

Sen. Ali Ndume, while fielding questions from the committee, said he did not write any petition against Melaye as alleged.

According to him, he only raised a Point of Order following publications alleging certificate forgery against Melaye, adding that “I didn’t raise petition, I only raised  point of order 14 and 15.’’

At the end of the interrogation, Ndume said his doubt about the allegation had been cleared since Melaye presented documents to show he actually graduated from the school.

He also said the attestation of the ABU V.C. further cleared his doubt.

“I commend the way the chairman of the committee conducted the proceedings of this investigation.

“I did not petition Melaye, I only felt it was part of my responsibility as former leader and someone who has been in the National Assembly since 2003 to ensure the right thing was done to protect the image of the institution.

“With these evidences, the judgment is now that of the public’’, he said.

Earlier, the Chairman of the committee, Sen. Sam Anyanywu,  said there was  an allegation based on privileged  information gotten by Ndume (APC-Borno),  that Melaye was not a graduate of ABU as he claimed.

He added that the allegation was based on certificate forgery.

“What is the issue is that you (Melaye), did not have first degree and you have been able to tender documents that we will go through.

“We will call the VC to either corroborate or deny your submissions.’’