BREAKING: Ballon d’Or 2020 scrapped by organisers due to coronavirus 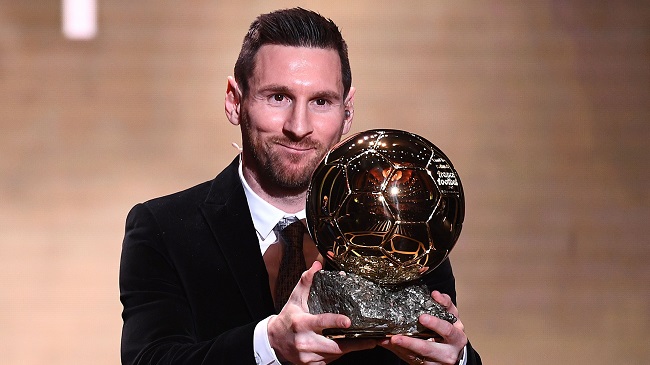 The Ballon d’Or will not be awarded this year, 2020, after the COVID-19 pandemic wreaked havoc on the football calendar, organisers France Football magazine said on Monday.

This is happening for the first time in the event’s 64-year history.

The prestigious award, voted for by journalists, is an annual prize given to the best male footballer in the world since 1956.

The women’s Ballon d’Or was first awarded in 2018.

The 2019/2020 season has been ravaged by the pandemic, with all the major European leagues suspending matches from March to June.

International tournaments, such as the European Championship and Copa America, were also pushed back to 2021 due to the virus.

Pascal Ferre, editor-in-chief of France Football, said in a statement: “From a sports perspective, two months (January and February), out of the eleven generally required to form an opinion and decide who should lift the trophies, represent far too little to gauge and judge.

“…Without forgetting that the other games were played – or will be played – in extraordinary conditions (behind closed doors, with five replacements).”

The final stages of the Champions League, from the quarter-finals, have also been rescheduled as a mini-tournament featuring single-leg matches behind closed doors in Portugal next month.

Ronaldo can still help Juventus win the Serie A and UEFA Champions League double this season.

But the Portuguese forward will be among several leading players who will miss the opportunity to contend for the individual honour.

Bayern Munich striker Robert Lewandowski reached 50 club goals this term and has an opportunity to win the treble.

Also, Messi became the first player in Spain’s La Liga to record 20 goals and 20 assists in a single campaign.

To fill the void left by the annual ceremony, France Football magazine’s jury of 180 will elect an all-time “Dream Team” at the end of the year.

War Against Corruption At Crossroads – Presidency
The Presidency, on Sunday, affirmed that the present administration’s war against corruption is at crossroads, saying that Nigerians must join hands to roll it back on course… Read Full Story
Air Force reveals last 6 hours of Arotile’s life •She suffered head injuries, it says
DETAILS of the last six hours of the late first combat helicopter pilot, Tolulope Arotile have been released by the Nigerian Air Force. The details were contained in a preliminary investigation report released by NAF’s Director of Public  Relations and Information, Ibikunle Daramola, on Sunday… Read Full Story
COVID-19: NCDC Confirms 556 New Cases, Total Now 36,663
The Nigeria Centre for Disease Control (NCDC) has confirmed 556 new cases of COVID-19 in the country, bringing the total number to 36,663… Read Full Story
MONDAY LINES: Mourning Our Air Force Heroine
Someone said after COVID-19, the next most-talked-about incident in Nigeria this year would be the death of the 23-year-old Air Force pilot, Tolulope Arotile. I agreed. In her life (and death), the wise must have learnt how old age and wealth count very little in calculating success. Within 23 short years… Read Full Story
Third Mainland Bridge: FG, Lagos Govt Declares Readiness For Partial Closure
Barely four days to the partial closure of the 3rd Mainland Bridge for rehabilitation, the Federal Controller of Works in Lagos, Mr Olukayode Popoola, on Sunday, said massive rehabilitation of alternative routes… Read Full Story
You Misconstrued Appeal Court’s Judgment, Sacked Chairmen Tell Oyo Assembly
The sacked Chairmen of local government councils in Oyo State have described a resolution by the state house of Assembly asking them to hand over all properties in their possession as misconstruing last week’s Appeal Court judgment by Justice Haruna Tsammani… Read Full Story
Big Brother Naija Season Five Begins, Breaks The Internet
A few hours ago, the biggest reality show in Africa, Big Brother Naija, came back on screens with the promise of glitz, drama, controversies and premium entertainment… Read Full Story
Meet The 20 Housemates In The BBNaija Lockdown House
The much-awaited fifth season of BBNaija themed ‘The Lockdown Edition’ officially kicked off on Sunday, 19th July. Returning host, Ebuka, got the show rolling by taking viewers on a tour of the house before introducing the 20 housemates who will be vying for the N85m grand prize… Read Full Story
Expert Predicts MPC Will Leave Rates Unchanged
The Monetary Policy Committee (MPC) of the Central Bank of Nigeria (CBN) will hold all the existing rates at its meeting this week, a financial expert has predicted… Read Full Story
Deregulation Will Force Down Petrol Price, PPPRA Says
The Petroleum Products Pricing Regulatory Agency (PPPRA) says full deregulation of the downstream oil and gas sector will help force down the price of Premium Motor Spirit (PMS) otherwise called petrol… Read Full Story
EDITORIAL: Unifying The Exchange Rate
IN compliance with one of the conditions attached to the $3.4 billion Rapid Financing Instrument from the International Monetary Fund (IMF) for the purpose of addressing the severe economic impact of the Covid-19 shock and hamstrung by the sharp fall in oil prices as well as the reduction in Diaspora remittances… Read Full Story
VERITATEM: Tolulope, Forever
Ours is a country that wastes its best. If you have exceptional talents, be careful! Sooner or later, they will come for you. The hatred will come not only from your classmates but even from your teachers, your uncles and aunties. Household enemies can be the deadliest of all foes. The talents that bloom in our country… Read Full Story