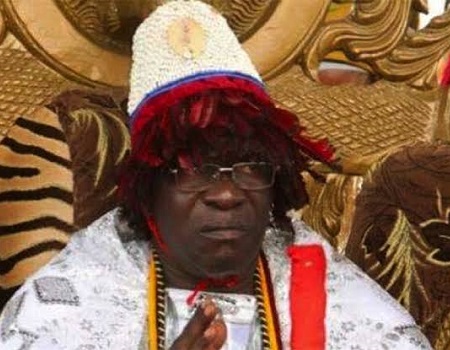 Tribune Online gathered on Thursday that the paramount ruler who was also Chairman Kogi State Traditional Council died in Abuja on Wednesday night after a brief illness.

The monarch has allegedly been in an Abuja Hospital undergoing treatment for an undisclosed ailment for over a month now, the source said.

HRH Michael Ame-Oboni who is also the President Kogi council of chiefs retired as an estate officer from the Federal Capital Development Authority (FCDA).

He was said to have retired as a Deputy Director before settling down in Lokoja where he had built his house before his appointment as Attah Igala in 2013.

His appointment had put to rest several months of waiting by the people, after the demise of the former Attah Igala, Alhaji Aliyu Obaje, who died in July 2012.

He was born in 1948. He enrolled at the Saint Boniface Primary School Idah and completed his primary education in 1960.

He was admitted into Saint Augustine College Kabba in 1961 and graduated in 1967.

Prince Idakwo worked briefly at the Ministry of Lands in the then old Kwara state as a land inspector from 1974 to 1975. He resigned in 1975 and proceed to Kaduna Polytechnic in 1976 to study Estate Management and graduated in 1980.

In 1981, he took up an appointment with the Federal Capital Development Authority (FCDA) and retired in 2006 as a Deputy Director

He was the third in his lineage to become the Attah Igala, after his father, the late Ameh Oboni, who died in 1954.

He was appointed as the new Ata of Igala in December 2012.

The chairmanship of SIEC, Hon. Mamman Ida Erri in a statement issued by Hon. Commissioner (SIEC) and Chairman media and publicity Hon. Alh Yakubu Musa Chogudo stated thus, “We would like to express our deepest condolences to the people of Igalla kingdom as they deal with their grief in response to the recent death of His Majesty King Micheal Idakwo  Ameh Oboni III of Igalla kingdom.

“Our prayers and thoughts are with all of you at this time of great sorrow. We pray GOD to repose his soul in eternal bliss and grant his immediate and distant families the fortitude to carry on peaceful life in his absence.

Obaseki, Ize-Iyamu, others to sign Peace Accord with General Abubakar Committee ― INEC