BREAKING: ‎Guests disperse S/Court as swearing-in of Tsoho as Acting CJ of FHC fails to hold 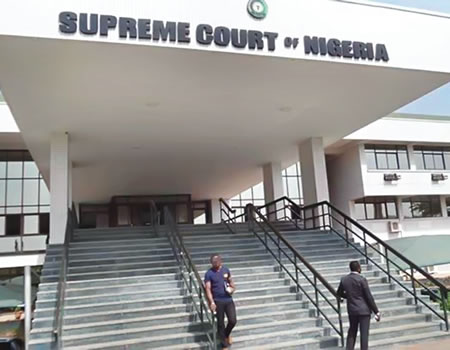 The swearing in of Justice John Tsoho as the acting Chief Judge of the Federal High Court by the Chief Justice of Nigeria (CJN), Justice Ibrahim Tanko Myhammad, failed to hold as scheduled on Friday morning.

Following the retirement of Justice Abdu Adamu Kafarati on Thursday, July 25, 2019, from the High Court bench, having attained the mandatory retirement age of 65 years, Justice Tsoho, being the most senior Judge of the court was recommended for appointment as the acting  Chief Judge of the court.

It will be recalled that the Federal Judicial Service Commission (FJSC), had last month nominated Justice Tsoho to the National Judicial Council (NJC), to succeed  Justice Kafarati , who retired onThursday, July 25.

However, Justice Tsoho’s swearing-in ceremony which was supposed to take place at the main bowl of the apex court at 10 am on Friday could not hold because, “There was no letter from the Presidency approving the swearing-in”.

Though, at 9:37 am on Friday, Justice Tsoho and a large number of his well-wishers and staff of the Federal High Court were seated, but the CJN m, who ought to swear-in Justice Tsoho as the acting Chief Judge, was conspicuously absent.

After a long wait till about 11:30 am, a staff of the Supreme Court, who spoke on behalf of the Chief Registrar of the court informed the gathering that the swearing-in will not take place.

He said that the Supreme Court is still expecting the letter from the Presidency, authorising the swearing-in if Justice Tsoho as the acting CJ of the Federal High Court, adding that when they receive the letter, Tsoho will be sworn in.

A senior lawyer, who was among those in attendance said that the unfortunate lapse has created a vaccum in the Federal High Court leadership, as the tenure of Justice Kafarati expired by 12 midnight on Thursday.

The Director of Information of the Supreme Court, Dr. Festus Akande told the Nigerian Tribune that, “Once the letter reached the court from the Presidency, the swearing-in will take place immediately. It can even happen on  Saturday, if we get the letter on Friday.”

It would be recalled that Justice Kafarati performed some of his last official duties as head of the court few weeks ago when he unveiled the Federal High Court civil procedure rules 2019 as well as an Alternative Dispute Resolution (ADR) Centre in Abuja.

Justice Kafarati who was born on July 25, 1954 and hails from Kwami in Gombe State, took over from Justice Ibrahim Auta who retired on September 16, 2017, after he clocked 65 years, was appointed judge on October 31, 1990.