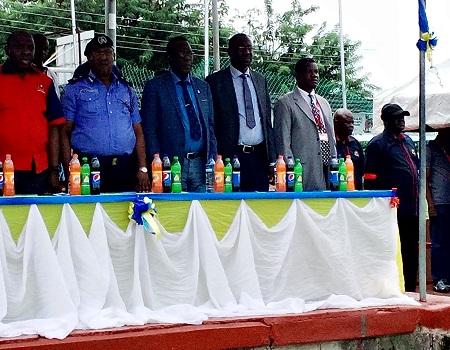 The management, Bowen University, Iwo, headed by Professor Joshua Ogunwole, the Vice-Chancellor of the institution, has embarked on the fortification of the campus in readiness to welcome the students of the institution for the next academic session starting today.

Speaking at the passing-out–parade of the security arm of the university after their weeks of intensive training on vigilance and peacekeeping strategies, Professor Ogunwole stated that quality education with its core value of excellence, godliness, integrity, leadership among other virtues, could thrive under a secured or fortified campus.

He said that university’s efforts in the repositioning the delivery mode process towards the 21st century skills alongside the ongoing facilities upgrading on the campus to ensure and sustain a high-performance culture to birth a world-class university informed the university’s decision to invest more on the provision of a learning-friendly environment.

His words: “The management will put in place what will be required to eliminate all forms of incursion and have a community where good security is paramount. I want to plead with members of the community to cooperate with this team of men and women while they are going about their duties in order to deliver the best possible service.

“In this regard, nobody on campus, not even the vice-chancellor, is above the law of check and clearance in the security/ vigilance process. Bowen remains a zero-tolerance to drug abuse.”

Speaking in the same vein, the Chief Security Officer of the university. Capt B. T Raymond (Rtd) asserted that a safe and caring school environment is one in which students feel safe.

According to him, going by the university’s eagerness to reposition and rebranding the university for greater productivity, the support of everyone will give hope and confidence that Bowen will be safe to achieve its goal, as he pledged that his team would discharge their accordingly.

We will be bullish about implementing our development plans ― Makinde