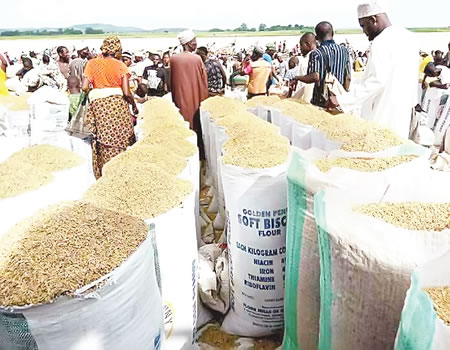 Nigerians are now feeling the pains arising from the border closure as the prices of staple foods such as rice, frozen foods and others continue to witness an increase of up to 65 per cent.

The News Agency of Nigeria (NAN) reports that the Federal Government of Nigeria had closed its borders since August 19 in an operation tagged “Ex-Swift Response.’’

The joint-border closure meant to check the smuggling of goods into the country is being supervised by the Nigeria Customs Service (NCS), Nigeria Immigration Service (NIS), Police and military personnel and coordinated by the office of the National Security Adviser.

However, some of the prices of the food items that come from the land borders, especially the Republic of Benin have increased astronomically.

The president’s spokesman, Mr Femi Adesina had in a statement in Abuja said that President Buhari expressed great concern over rice smuggling into the country.

The president said that the activities of the smugglers threatened the self-sufficiency already attained due to the administration’s agricultural policies.

“Now that our people in the rural areas are going back to their farms, and the country has saved huge sums of money which would have otherwise been expended on importing rice using our scarce foreign reserves.

“We cannot allow smuggling of the product at such alarming proportions to continue,’’ he said.

However, Nigerians are now feeling the pangs of the border closure as the price of a bag of rice that was sold around N12, 000 before now sells around N20,000 to N22,000.

To Nigerians, these foods are essential to their survival because they are consumed in large quantities which necessitated their large importation.

A rice retailer, Mama Ibrahim at Ketu Market in Lagos, lamented the absence of the locally-produced rice which was the reason borders were shut, adding that they were not available.

“The local rice is nowhere to be found because they cannot go round. Nigerians eat rice a lot; it is the most consumed food item in the country after bread.

“The Federal Government should have ensured self-sufficiency in rice before closing the borders. If the local rice is available, there won’t be any increase in the price in the market.

“We have been battling with the price of the local rice because since the borders were shut the price kept on increasing,’’ she said.

Mr Idowu Kalejaiye said that the pains that arose from the border closure were much more than what the citizen could afford.

“Prices of food items have gone up without any commensurate increase in our salaries which has never been enough.

“Government should have considered making the alternatives available in abundance before closing the borders which has resulted in cutting off the food supply.

“The claims that we are rice sufficient have been defeated because after the border closure, not only that we have shortage in supply but the prices of the locally produced rice have gone up.

“If we are self-sufficient in rice production as claimed, we should by now be exporting the product to other countries,’’ he said.

A major supplier of frozen food, Mr Segun Abdulahi, said that the border closure had affected sale of the food items.

“I think many have now found alternative to frozen foods because of the price increase. Even some of the varieties of fishes that are low in prices don’t enjoy much patronage again.

“Although there are high demands for some variety, we have low demand for items like Turkey and Sardines because of the relative price increase.

“To be frank, frozen foods are scarce in the market now. Only few of us that have it in stock increased the prices, so, maybe some of the customers don’t have a choice but to buy,’’ he said.

A poultry owner, Mr Kunle Olawuwo, however, lauded the decision of the government to close the borders, adding that it would enhance local production.

“The border closure will help us to realise what we are lacking in the nation by importing what we can produce in large quantity.

“For how long would we continue to be dumping ground for expired poultry products when we can have the chickens in abundance in Nigeria?

“Some people have turned smugglers because they don’t want their expired products to be examined before dumping them in the market for unsuspecting Nigerians,’’ he said. (NAN)

Makinde’s effort on education will pay off soonest ― Ladoja