The Murtala Mohammed International Airport (MMIA) Command and the Murtala Mohammed Area Command (Cargo Section), both of the Nigerian Customs Service (NCS) has revealed that N68.9million frozen products smuggled through the airport due to the border closure policy of the Federal Government, has been seized.

This was disclosed, on Tuesday, at a joint press briefing between the Customs Area Controllers of the MMIA command and Muritala Muhammed Area Command, comptroller Adewale Adeniyi and comptroller Lena Oyama respectively.

It was gathered that 40 cartons of the poultry products were intercepted on a South African Airways flight while 104 cartons were abandoned on the tarmac of the terminal. 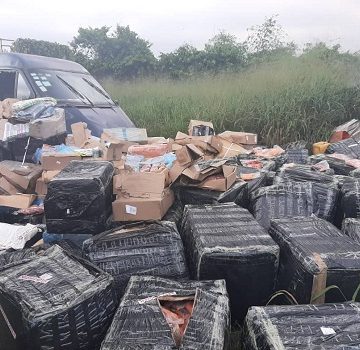 Speaking to journalists on Tuesday in Lagos, the Controller of MMIA, Comptroller Adeniyi said the seizure was as a result of the border closure because the seizure was the first of its kinds in the history of the airport commands.

According to Adeniyi, “on the night of 10th November, 2019, following the discharge of cargo from a South African Airways flight 5A060 from Johannesburg, our Tarmac operatives intercepted a consignment which were indicated as perishables, and are therefore qualified for pre-release at the cargo wing.

“The officers requested to sight the items before transferring them. Though the airway bill described the goods as fresh vegetables, the contents were later discovered to be assorted frozen products. In all, there were 40 cartons, including Beef, Pork and Fish fillets. It became obvious that the importers through his agents have prepared a pre-release documentation purporting the imports to be fresh VegeTables with the sole intention to evade the import prohibition order.

“At about 00:05 hrs, the following morning another consignment of 104 cartons comprising pork meat, beef and turkey was seen abandoned inside 4 Dollies close to Gate 13. The Total Duty paid value of the two seizures is N68.9million.

“The tarmac seizure is coming on the heel of other seizures recently made at the Cargo Wing. This clearly points to a possible shift of strategy by smugglers. With the border drill making it a nightmare for smuggling operation at the borders. Intelligence has suggested that our airports are now being considered as options.”

The CAC added that though the MMIA and the cargo section commands are distinct administratively, they have a good working relationship to stop smuggling.

“Though, the commands are distinct administratively, we are still connected in our operations, since the tarmac in the International wing Services the cargo operation in the other command. It is therefore imperative for us to create a close working environment to ensure that criminals do not exploit divisions to perpetrate their business. I am glad to inform you that the close working relationship nurtured a smooth take-off of the new Command.

“To ensure effective coverage of the tarmac, we conduct joint surveillance of the Tarmac Area, an action that resulted into the seizures, for which we are briefing you today,” Comptroller Adeniyi explained.

Also speaking, the CAC of the Cargo section, Comptroller Oyama said her command had intercepted 23 bags of stun guns, military uniforms and 25 packages of drones.