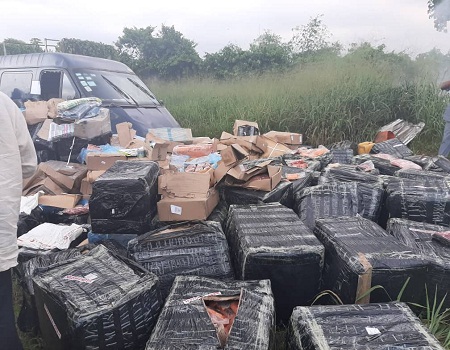 Importers of frozen foods have continued to devise other means of beating customs security network at the borders as they have now resorted to diverting their illegal activities to the country’s international airports, particularly the Murtala Muhammed International Airport, Lagos.

Making the disclosure, the Nigeria Customs Service (NCS), Lagos airport Command also declared that it had generated N47.7bn in revenues between January and October 2019, surpassing the 2019 target set for it with 110 per cent.

According to the Command, it has in the past two days intercepted two consignments of frozen foods with one of them disguised as vegetables with total duty paid value at N68,850, 000.

The other consignment was abandoned at the Gate 13 of the airport by the importer or its agents, probably because of the close monitoring on their activities by the officials of the command.

According to Adeniyi, the command’s tarmac operatives intercepted some consignments which were indicated as perishables and therefore qualified for pre-release at the cargo wing of the airport.

He explained that while its officers at the command insisted on inspecting the items before transferring them, it was discovered that the items included 40 cartons of beef, pork and fish fillets.

“Though, the airway bill described the goods as fresh vegetables but were rather found to be frozen foods, which were contraband in the country. It became obvious that the importer through his agents had prepared pre-release documentation purporting the imports to be fresh vegetables with the sole intention to evade the import prohibition order.

“At about 00:05 hours the following morning, Monday, November 11, 2019, another consignment of 104 cartons comprising pork meat, beef, and turkey was seen abandoned inside four dollies close to Gate 13. The total duty paid value of the two seizures is N68,850.”

Adeniyi declared that the seizures were warning to importers of contraband goods into the country, reiterating that its command would make it extremely difficult for such persons to use the airport to perpetuate their criminal activities even as he assured that the command would intensify its surveillance within the airport environment.

The items were destroyed at the Federal Operating Unit of the service at Ikeja.

Also, the CAC, Murtala Muhammed Airport Area Command, Mrs Lena Oyama disclosed that the command had generated N47.7bn in the first 10 months of the year describing the feat as an improvement to the same period in 2018 when the command generated N44bn in 10 months in 2018.

The breakdown of the generation indicated that in August, the command generated N4.3bn, which equally represented 109.6 per cent increase from the expected revenue.

The command generated the total sum of N4.320bn, which represented 100.6 per cent increase in the expected revenue target for the month of August.

For the month of September, the command generated N4.9bn, which also represented 115.6 per cent increase in revenue target, exceeding the monthly target for the command with N674.1m.

Reps call for deployment of more security operatives in Ilaje

Tinubu, most progressive Governor of the 1999 Class ― Sen Nnamani