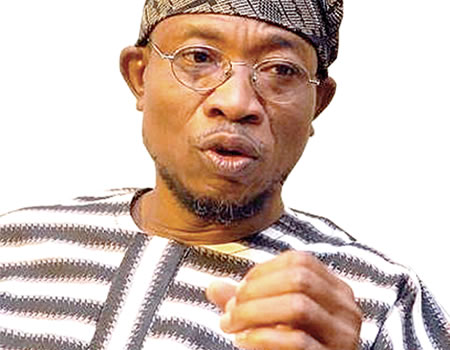 The Minister of Interior, Ogbeni Rauf Aregbesola, has assured border residents of the Federal Government readiness to provide legitimate businesses as replacement of illegal activities at the border areas.

Aregbesola disclosed this on Saturday while inaugurating a Foward Operations Base (FOB), of the Nigerian Immigration Service, in Oja Odan area of Ogun State.

The Minister noted that smuggling and illegal migration had haphazardly undermined the nation’s economic sovereignty, over the years.

He explained that those behind illegal activities at the borders take advantage of its porous nature, submitting that with the borders, ongoing drill, “the porosity at the borders would be brought to a halt permanently.”

The former governor of State of Osun said ” In as much as we like to maintain cordial relations, it must be within the ambit of the law. Illegal migrations, smuggling, trans-border banditry, criminality, subversive economic activities and other practices have undermined our economic sovereignty, way of life and rampant in these borders.

“I urge all our agencies to be vigilant and be up to their bidding and ensure that these untoward practices are brought to a halt. Again, I want to commend the courage of our President for approving the drill that is happening now.

“You seem not to be happy now, but I assure you that you would be happy later, because the Federal Government will give you alternative businesses and legitimate engagement that would bring legitimate wealth to your pockets and happiness to your land.”

He, however, challenged traditional rulers in the border areas to prevail on their subjects on the need to engage in legitimate businesses and be responsible citizens.

The Minister promised to present their complaints over alleged killings of people in the area by operatives of the Nigeria Customs Service.

“It will be insane of any officer or operative bearing arm to just shoot at people; it’s impossible. But when people attempt to violate laid down rules and order, the only option left for men whose primary duty is to safeguard the interest of the nation, is to apply maximum or minimum force to ensure obedience to law and order.

“We are not by this recommending reckless use of an arm. So, we are appealing through you (traditional rulers) to know that the interest of the nation is paramount,” Aregbesola said.

The State Governor, Prince Dapo Abiodun, in his remarks, frowned at alleged killings of the people by operatives of the NCS, saying the state cannot afford losing its residents, while charging security operatives to be responsible in the cause of discharging their duties.

Abiodun also appealed to men of NIS not allow neighbouring countries to take the state’s proximity for granted, saying Nigeria “is not a banana republic.”

The Comptroller General of NIS, Muhammad Babandede in his speech said the 12 FOBs were constructed in various locations across the country and meant to provide a conducive working environment to operatives at the border.

(Buhari’s Speech): Some measures may be inconvenient, but they are sacrifices…

Anti-smuggling: Joint border operation rakes in N135m in one month