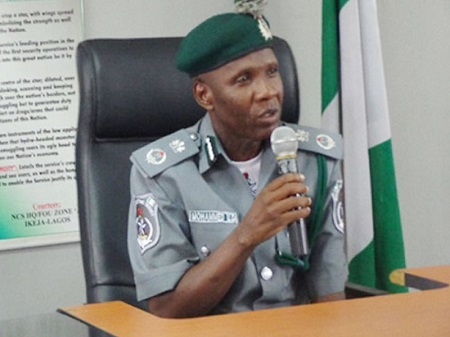 The Joint Border Operations Drill Sector 3 of the Nigeria Customs Service (NCS) says it has seized more than N135 million worth of illegal contrabands in the last one month in North Central Nigeria.

The Acting Coordinator of the operations, Mr Mohammed Garba, disclosed this on Wednesday in Ilorin while briefing newsmen.

The News Agency of Nigeria (NAN) reports that the sector covers North Central states of Kwara, Niger, Kogi and Benue.

Conducting journalists round the seized items, Garba said that 57 units of vehicles of various types and 1,355 bags of foreign rice were confiscated from smugglers operating in illegal business in the axis.

According to him, three long single barrel guns, knives and three cutlasses seized at Lokoja axis of Kogi have been handed over to the Police in the state.

Another two long single barrel guns, eight life cartridges and one locally made Pistol confiscated at Kotangora axis of Niger State, he claimed had been handed over to the Police in the state.

Other items impounded by the service are 20 bags of dried yam flour used to conceal foreign rice, 1,728 jerry cans of petrol and engine oil, and 155 drums with petroleum products and lubricant oil as well as 16 motorcycles popularly called Bajaj used in smuggling rice.

Garba, who is a Controller of Customs in the service, said that six suspected smugglers arrested during the operation had been released on administrative bail.

He, however, explained that the sector would continue to engage stakeholders on the disadvantages of smuggling and immense benefits of the border closure.

“One of our focal points since the assumption is sensitisation, engagement of stakeholders of all the border communities of Ilesha-Baruba, Yashkira, Chikanda and Okuta axis of Baruten Local Government Area of Kwara. Kaiama-Jebba-Mokwa-Wawa-Babanna-Kotangora axis of Kwara and Niger states, respectively.

Lokoja-Abuja-Lagos-Express Road of Kogi State and Otukpa, Adikpo-Ugbema axis of Benue State where we met and engaged the Stakeholders and Traditional leaders of the various aforementioned communities.

“Just last week, key stakeholders were invited to this particular spot in continuation of our sensitisation programme.

“I want to assure you that we will continue to sensitise and engage our stakeholders on the benefit of border closure,” the coordinator added.

He asserted the joint border operations were always in the military mood to ensure total compliance that will translate to effective revenue generation, suppression of smuggling, facilitation of legitimate trade and protecting national security.

Kaduna Varsity expels 80 over exam malpractices, warns against other vices