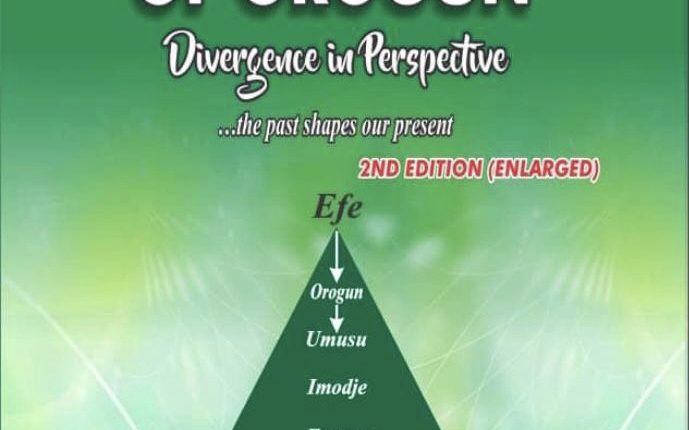 “In this account, Mr. Orgu has made an invaluable exposition and contribution to available literature on the historical antecedents and development in Orogun kingdom. I therefore recommend this book as a compulsory text not only for Orogun sons and daughters but for academics, politicians, public servants and civil society actors, students and the general public.”

Any nation, community or clan that desires to be on the path of sustainable development must understand their past, be abreast of the present so as to be able to project into the future.

Writing of any book, especially on the history of a people is an arduous academic task. This is largely because there are always variations in the account of the social, political and economic lives of the people at different epochs and circumstances.

The biases of the author, training, beliefs, age and dispositions could also influence such documentations. Historicizing an ethnic group such as Orogun cannot be free from such precepts.

Notwithstanding these challenges, the author still embarked on this challenging, but ennobling task. This enlarged 280- page book, “Historiography of Orogun: Divergence in Perspective” (2nd Edition, Enlarged) has an Introductory Section and fourteen Chapters.

In the introduction, the Author documented the historical antecedents and origin of the Orogun people, from the perspective of oral history presented by his early leaders. There was a version of the origin of the kingdom that the founding father of Orogun was Efe, who migrated from the ancient Bini kingdom and fought many battles to retain his gallantry.

Documentary evidence reveals that Orogun was a warrior who fought several battles to arrive in the present location. Consequently, Orogun kingdom, made up of about twenty-four major villages and towns, are all descendants from a common ancestor. The government of the clan is fundamentally gerontocratic, with a decentralized system of government. The author addressed some of the outstanding and unresolved issues on the history of Orogun such as the gender question of whether the ancestor was a man, or a woman.

However, that does not foreclose the need for more researches on the subject.

In chapter one, the geneology of Orogun focusing on the Bini Extraction and the cultural battles that were fought, was examined. The author argued rightly too, that Oriete was the father of Efe: Efe being the father of Orogun, and Orogun gave birth to Umusu, Imodje, Emonu, Unukpo, and Ogwa. The people of Orogun kingdom revered and pay homage to the god called Erose Efe which reportedly saved Efe and his children in the time of adversities.

Chapter Two looked at the birth, migration and children of Orogun. In a major work on the history of Orogun, Igba gave account of the birth of Orogun. Reports show that Orogun might have moved to Aboh between 1500 and 1510 AD, and when he attained the age of 17 years, settled down to marry his first wife and started giving birth to children. Available evidence shows that between 1500 or date, thirty-five Kings (Ekpara) have ruled Orogun kingdom, with their period of reign ranging from one to fifteen years.

Chapter Three examined the gender debate of Orogun: Man or Woman? Based on research evidence, the author concurred that Orogun, was a man, not a woman. There were historical facts and deities to support the contention that Orogun was a man who married two wives.

Chapter four looked at the General Culture and Tradition of the Orogun People. The author has argued that the Orogun people have maintained their cultural and traditional endowment from generation to generation, and its sustainability over the years have remained intact.

This is quite evident from the reverence of the totemic animal, Iguana, on account of the role it played in the sojourn from Aboh to their present location. As a tradition of the Original kingdom, an indigene of Orogun is forbidden from killing or harming the Iguana, or eating its meat. The same culture is extended to any stranger living in Orogun land. The danger of any stranger trying to do otherwise, and if caught, will face severe consequences.

Chapter five, the governance structure of the Orogun kingdom was examined from its inception. The governance system has always been gerontocratic, where the oldest man from the Umusu quarters were the Ekpara-uku.

In chapter Six, presented in a tabular format, various Ekpara-Uku that have governed the Kingdom till date. Chapter Seven, examined various arguments on the true position of the Ukomo of Orogun by Prof. Fred Opute, Chief (Dr) David Akporugo and Chief (Barr) Andi Osawota. Chapter Eight, examined the Future of Orogun Kingdom, and other related issues. Chapter Nine, X-rays the absence of an Ovieship system in Orogun Kingdom and role of OPU and Dr. Ovba Committee’s report, including the arguments and recommendations on why there should the need for change.

Chapter Ten examined the Amai Council, suspense and the reconciliation with Aboh Kingdom: The late Okpu’s role and others. Chapter Eleven, discussed the Orogun hegemony and the denial of rights largely in the context of the successful transition from Ukwuani to Urhobo land, taking note of the division and suspicion, among other challenges.

Chapter Twelve, provided an insight into the land sharing formula and land dispute the Orogun kingdom had with one of its communities, Sanubi-Orogun. Whenever, there is a sale of Orogun land, the money goes to the Okpara-uku in Orogun, because in the book of the kingdom, it is only the king’s name that is there, and empowered to order for the sales of the clan’s property and land. Chapter Thirteen, looked into the Social and Cultural Characteristics of the Orogun kingdom, paying attention into marriage outside and within Orogun Kingdom. In all, there are sanctions on a married woman who engages in extra –marital relations.

Chapter Fourteen examined the history and religious activities in Orogun. This started in 1884, with the prefecture of upper Niger which was created by Roman Catholic Church authorities to provide missionary care around Lokoja and north of the town. There is a section on the commentaries by illustrious Orogun sons and daughters.

In this account, Mr. Orgu has made an invaluable exposition and contribution to available literature on the historical antecedents and development in Orogun kingdom. I therefore recommend this book as a compulsory text not only for Orogun sons and daughters but for academics, politicians, public servants and civil society actors, students and the general public.